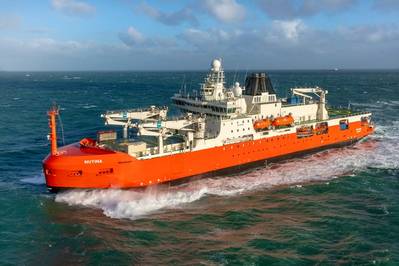 Australia’s new icebreaker, RSV Nuyina, has begun its 24,000-kilometer voyage from the Netherlands to its new home port of Hobart. The vessel will be the main lifeline to Australia’s Antarctic and sub-Antarctic research stations and the central platform of the Australian Antarctic Division's Antarctic and Southern Ocean scientific research.

Construction of the ship commenced at Damen’s Galați shipyard in Romania in May 2017, and the vessel was floated out in September 2018 prior to its scheduled arrival at its home port Hobart in 2020. By July 2020 the ship was 98% complete, but delays brought on by the COVID-19 pandemic delayed sea and ice trials and derailed the delivery schedule.

The ship was formally handed over to Australia from its European build team in a ceremony on August 19, and its home journey began on September 1 following final stages of testing in the North Sea. The ship is expected to arrive in Hobart in October.

Australian Antarctic Division Director, Kim Ellis, said the delivery voyage is a good opportunity for the new Australian crew to test the ship’s capabilities on a long sea journey. “It’s going to be an amazing opportunity to see this ship in action, in challenging weather, on a really extended voyage,” he said.

The voyage will take the ship close to 60 degrees South and the edge of the sea ice surrounding Antarctica.

“It’s a monumental occasion to take delivery of a brand new icebreaker that’s been custom designed and built for the Australian Antarctic Program.

“The people of Hobart will be blown away when they see the size of the ship. It’s just very imposing and very impressive.”

Once it arrives, Nuyina will undertake a period of testing, commissioning and certification of various systems and capabilities, including ice trials in Antarctica.

“Over the next two years we will test and certify the different capabilities of the ship, such as the logistic capabilities, passenger carrying and fuel carrying capabilities, and the incredible array of scientific systems on board,” Ellis said. “In the ship’s 30-year lifetime, these two years of testing will set us up for a very long and secure future.”

The 160-meter-long, 24,000-metric-ton RSV Nuyina, designed by Knud E Hansen, was built to replace the retired Aurora Australis, offering scientists extended access to the Southern Ocean and Antarctica. It will be operated by Serco under the direction of the Australian Antarctic Division for the Australian Government.

Minister for the Environment, Sussan Ley, said that with the nation’s flag now flying proudly on the ship’s mast, Nuyina has become a symbol of Australia’s commitment to Antarctic science. “RSV Nuyina will soon be the backbone of the Australian Antarctic Program,” Minister Ley said. “It will establish a scientific legacy that will last for generations. I look forward to seeing the vessel sail up the River Derwent in Hobart.”