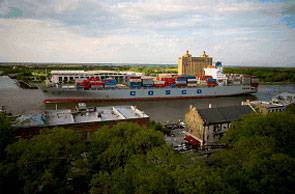 The Georgia Ports Authority’s (GPA) Executive Director Doug J. Marchand announced at its board meeting that China Ocean Shipping Company (COSCO) now has vessels calling on the Port of Savannah.

“We appreciate COSCO’s confidence in our ability to handle its container volume now and in the future,” said GPA’s Executive Director Doug J. Marchand. “The Port of Savannah offers a logistically friendly location with two on-terminal rail providers and immediate access to two interstate highways, which helps us attract additional cargo in a challenging economy. We welcome COSCO and look forward to working closely with them.”

The first COSCO vessel to call on the Port of Savannah, M/V Zhen He, arrived at the GPA’s Garden City Terminal on May 10, 2009. Prior to the Zhen He’s arrival, COSCO moved cargo through Savannah on alliance carrier vessels. COSCO along with K-Line, Yang Ming and Hanjin comprise the CKYH Alliance.

"COSCO recognizes the importance of providing our customer with the most options in selecting a gateway for their cargo from Asia” said COSCO’s Vice President of Trade Howard Finkel. “By adding Savannah as a port of call for our vessels, we have enhanced our customers’ ability to reach the consumer markets faster and at a lower cost. The already established growing number of distribution facilities in proximity to the Port of Savannah represents a new and exciting market opportunity to grow our business."

COSCO ranks fifth out of 50 carriers in terms of total liner capacity, according to the 2008 ASX-Alphaliner report. Previously, COSCO was the only Top 20 carrier without vessels calling on Savannah. The carrier has moved cargo through the port with the AWE2 service. The service rotation includes Savannah, New York, Boston, Qingdao, Shanghai, Ningbo and Yokahama.