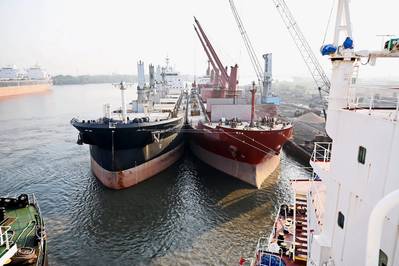 The overall index, which factors in rates for capesize, panamax and supramax shipping vessels, was down six points, or about 0.3%, at 2,067 points, posting a weekly fall of 6.6%

Capesize rates shed about 4.7% for the week, posting their third consecutive weekly decline.

Singapore iron ore futures were set for weekly losses, with renewed optimism about economic stimulus in China quickly fading and focus shifting back to COVID-19 restrictions in the world's top steel producer.

Farmers in India have fallen behind in planting key summer-sown crops such as rice, corn and soybeans due to the uneven distribution of monsoon rainfall, official data showed.

The supramax index fell 40 points to 2,163 points, shedding over 5.5% this week and heading into the seventh straight week of declines.