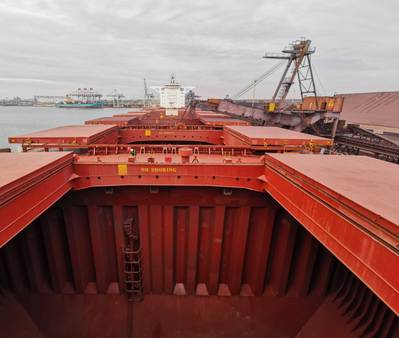 The Baltic Exchange's main sea freight index posted its biggest quarterly rise since June 2020 on Friday, propelled by strong gains for larger vessels, with the panamax segment marking its best quarter in over six years on robust U.S. grain exports.

The Baltic dry index, which tracks rates for capesize, panamax, and supramax vessels, lost 57 points, or 2.7%, to 2,046 on Friday.

But the index gained more than 20% for the month and nearly 50% for the quarter.

For the quarter, the index registered a gain of over 10%.

Average daily earnings for capesizes, which typically transport 150,000-tonne cargoes of coal and steel-making ingredient iron ore, among others, fell $55 to $18,327.

The United States had particularly strong grain exports, which helped the panamax segment during the quarter, said Emily Stausboll, shipping analyst at BIMCO.

A hard winter in the Northern Hemisphere also boosted demand for certain ice class ships and several other vessels as people had to turn to some specific routes, Stausboll said.

(Reporting by Anjishnu Mondal in Bengaluru; Editing by Aditya Soni)