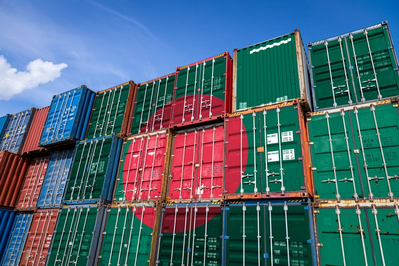 Firefighters in Bangladesh brought a blaze at a container depot under control on Tuesday, three days after fiery explosions killed at least 43 people at a facility that a senior fire service official suspected had not followed safety guidelines.

Drone footage showed smoke and rows of burnt-out containers from the fire that began late on Saturday, triggering blasts and blazes at Sitakunda, 40 km (25 miles) from the southeastern port city of Chittagong.

Authorities have not determined the cause of the disaster but suspect a container of hydrogen peroxide was the source.

"The fire has not been put out completely but there is no risk of further explosion as our team has sorted out the chemical containers .. one by one," senior fire service official Monir Hossain told Reuters.

He said even basic fire-safety measures had not been implemented with only a handful of extinguishers in a depot storing dozens of containers full of everything from clothes to chemicals.

"We haven't found any basic fire safety measures ... There were simply some extinguishers. Nothing else. They didn’t even follow storage guidelines for hazardous chemicals," Hossain said.

The director of the facility, the BM Container Depot, did not answer calls to his mobile telephone seeking comment.

Shipping group Maersk said it would fully cooperate with the authorities in case its support was needed in the investigation.

"We are in touch with our customers to keep them informed on the status of their cargo as and when we have confirmed information coming through," Maersk said.

Ruhul Amin Sikder, secretary of the Bangladesh Inland Container Depots Association said on Monday its members, including BM Container Depot, regularly handled hydrogen peroxide without incident and as far as he knew, the company followed guidelines.

Home Minister Asaduzzaman Khan said an investigation had been launched and those responsible would face justice.

Bangladesh has grown quickly over recent decades to become the world's second-biggest exporter of garments but its industrial safety standards have not kept pace with its economic development and fires are common in factories and other places of work.

The death toll rose to 43, including at least nine firefighters, after the remains of two people were found, fire service official Purno Chandro Mursody told Reuters.

"We believe one of them was a firefighter, while the other was a security guard," he said.

"Some containers are still smoking. It could take days to douse the fire completely. We need to remove the containers with utmost caution as the fire might be stoked."

Chittagong's chief doctor, Mohammed Elias Hossain, said some of the injured were in critical condition. Of the 200 or so injured, 50 were rescue officials, police said.

Troops were deployed to try to prevent chemicals spreading into canals and along the nearby coast, officials said.

The last major fire in Bangladesh was in July last year when 54 people were killed at a food processing factory outside the capital, Dhaka.