Batteries: Ready to Scale Up 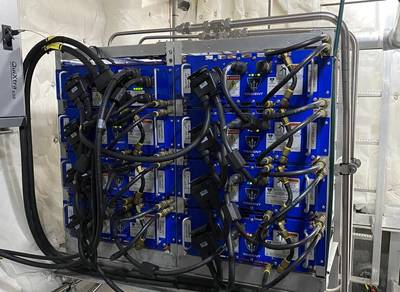 Batteries for maritime power have been picking up big momentum, benefiting from the most basic concept within Econ 101: supply and demand.

Geir Bjørkeli, Corvus CEO, said the company has “seen a significant uptake in orders from the U.S. market as well as a growing commitment from the government and industry players on reducing GHG emissions. Increased capacity and production flexibility will be key to meeting anticipated growth.”

The new facility will have an annual capacity of 200 MWh of stored energy capacity. Individual vessels typically have a capacity between 0.5 and 10 MWh installed, explained Sveinung Ødegard, Americas president at Corvus Energy. Corvus’ goal is to start delivery from a new factory in Q4 this year.

In its announcement Corvus cited increased demand from the tug industry.

Also on May 19, Houston-based Industrial Service Solutions (ISS) announced it is seeking bids from U.S. shipyards to build up to four hulls for what will become North America’s first fully-electric towboats. The zero-emissions vessels, which will be constructed for New York-based Zeeboat and available for charter from 2025, will run entirely on battery power, without the use of diesel engines—a first for towboats in North America. The batteries for this project are already sourced—from Shift Clean Energy, based in Vancouver, B.C.

These announcements continue to confirm that maritime battery applications are moving out of the experimental stage, that vessel electrification is available and in demand.

[For a demonstration, including discussion, of a large scale maritime ESS project check out the video of a battery-powered ferry making a 4-kilometer crossing, 46 times per day, every 15 minutes, between Helsingborg, Sweden and Helsingør, Denmark. The ferry pauses to charge on each side. It transports over 7 million passengers and nearly 2 million vehicles annually—clearly a battery powered workhorse. Of particular interest, note the giant shoreside charging device.] 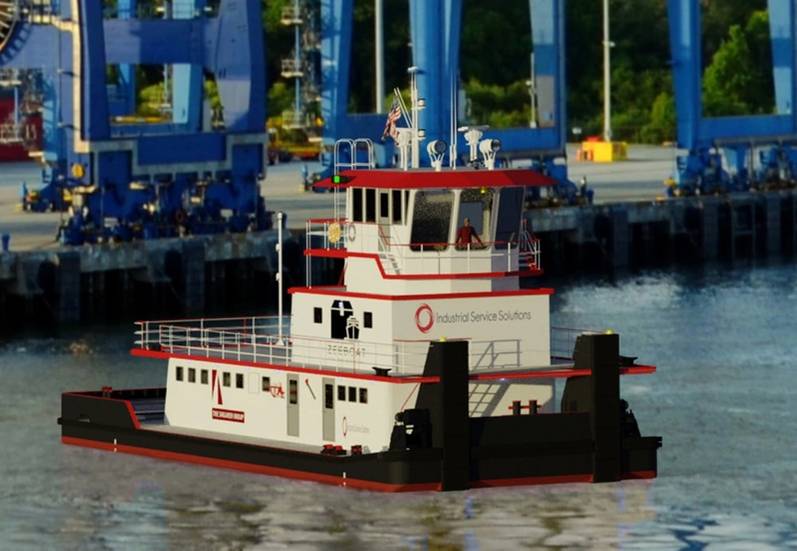 Industrial Service Solutions is seeking bids from U.S. shipyards to build up to four hulls for what will become North America's first fully-electric towboats. (Image: ISS)

US trends
Ben Wrightsman is President and CEO of the Battery Innovation Center (BIC), based in Crane, Ind. The BIC works for the development, testing, commercialization and advanced learning of high-performance and lightweight energy storage systems for commercial, defense and industry partners. BIC works closely with the Navy’s high-energy focused Naval Surface Warfare Center, also located in Crane. BIC signed on as a DOE “team member” for DOE’s battery innovation initiative, announced in May, the Agency’s $7 billion, five-year effort, focusing on battery materials processing and manufacturing.

In an interview Wrightsman commented that maritime battery applications, indeed, have reached an off-the-shelf status, but he still characterized the U.S. market as “pilot scale”, at least compared to European and Asian markets.

Wrightsman said that the battery supply chain presents challenges. Lithium costs have increased, and future demand will add pricing pressures. Raw materials are available today, but he expects supply risks by 2030. “If you don’t change anything,” he noted, with particular reference to the U.S. regulatory process, “we run risks of shortages. We need domestic production.”

Regarding safety, Wrightsman believes today’s batteries are “inherently safe” and that safety advances will continue, although at a cost. However, he said that overall declining costs will offset safety related increases. For comparison, he noted that fossil fuel systems, after 100 years, present numerous safety risks, from handling to storage to final combustion. Still, these risks are considered acceptable today. He expects a similar safety pathway for batteries. 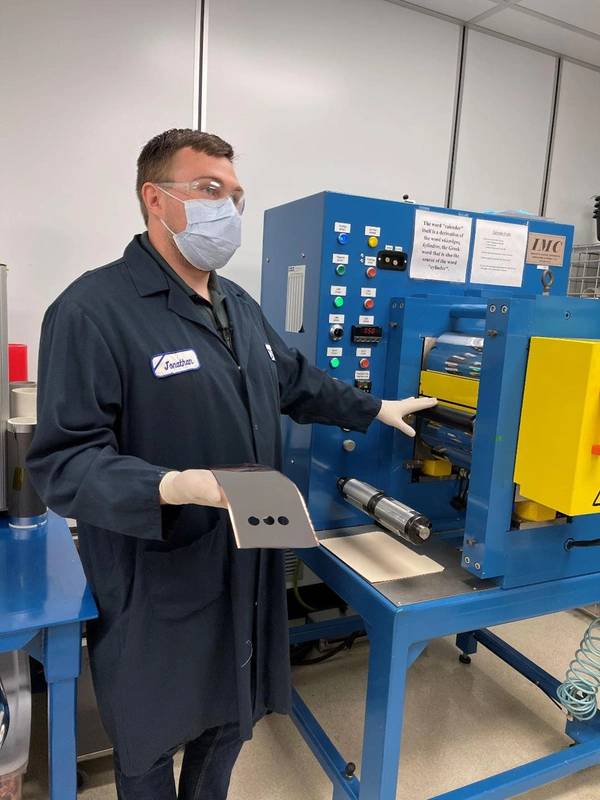 The future: How fast is it approaching?
Batteries are expensive, heavy and can present extreme hazards—and they need to be recharged. Batteries—really electric storage systems (ESS)—require extensive shoreside infrastructure. And if batteries are to be part of a green energy transition (why else make such a move?) that shoreside infrastructure needs to be connected to constant, unvarying and on-demand supplies of renewable electricity, including utility scale storage; in effect, batteries charging batteries. Even for niche operations in a harbor, it can’t be questioned when a vessel—not to mention 100 vessels—need maximum power, simultaneously.

“State of charge” (SoC) is an important concept in battery science, referring to the level of charge of an electric battery relative to its capacity. State of change is an idea that raises questions about obsolescence. If a workboat, for example, lasts 30, 40 even 50 years, decisions about today’s battery power and ESS are not without risks for vessel owners. In 5 to 10 years, today’s top-shelf tech could be outdated and uneconomical. And there are corollary risks, e.g., if related shoreside equipment and utility generation does not develop as needed, or as expected, a battery powered vessel could become a “stranded asset.”

The Maritime Battery Forum, established in 2014, is a membership group that works to “promote battery-based value creation and make batteries a success within the global maritime market.” Members include Corvus Energy, Damen Shipyards and Caterpillar Marine as well as much newer, specialized companies such as Aviloo and Beyonder.

The Forum’s website has a freely available, two-page simplified guide about batteries: “Which battery for your ship?” The guide covers the concept of battery “building blocks” and system designs and applications. It presents the central ideas inherent in thinking about and evaluating batteries and ESS performance. For a company starting an initial look at investing in a battery/ESS vessel, the guide can help project managers develop the right questions to ask so that further research remains productive and timely.

Questions about state of change—and how close significant change may be—also arise from a review of work within a new Dutch consortium focusing on industrial scale batteries and ESS. The consortium, formed last October, is called the Battery Competence Center and it includes universities, trade associations and private sector companies, including DAF Trucks, ELEO and Damen Shipyards. The Center is subsidized by REACT-EU; members contribute via fees.

One goal of the center is to “build up knowledge and competency in the field of battery technology.” The center wants related economic benefits to develop in the Netherlands, to decrease dependence on Asian suppliers.

For Damen Shipyards the center offers “an opportunity to apply knowledge from the automotive sector, which is way ahead of the maritime sector in the field of electrification, in the shipping industry,” said Peter van Terwisga, with Damen.

R&D is another priority. Looking ahead, the center will focus on the development of complex production processes and machinery. Other topics include thin-film technology and plasma chemistry, two specialty fields which the center says must advance in order to develop “a new generation of battery cells.”

Peter Rampen, principal research engineer with Damen, was asked how ship owners should balance questions about new technology, possibly very close at hand, versus moving ahead with current tech.  He said that shipyards today can “build safe and reliable battery ships” using “off the shelf” technology, although that availability primarily includes ships with relatively limited demands for power and range.

Rampen cited a number of ongoing ship-battery challenges. He said maritime engineers have limited experience with battery technologies and a limited regulatory scope requires a risk-based approach for every project.

Among R&D teams he cited a number of priority issues. To advance safety he sees the need to develop batteries in which fires and explosions from “thermal runaway” can’t happen, or the odds are drastically lowered. Newer designs will require fewer safety precautions, allowing more compact and easily configured systems.

Standardization, Rampen said, will decrease costs. Modular and scalable batteries will draw a wider variety of ship types. The building block concept will offer the flexibility needed to use fewer types of batteries—but batteries that can be produced in large quantities—for an increasing number of vessels.

Another important goal is to develop shared production across differing transport industries and modes, e.g., ships and trucks, or even using the same battery modules. Finally, battery recycling is critical for keeping ESS sustainable.

“Current Direct” is a European battery project, funded by the European Commission’s Horizon 2020 program, expected to move to demonstration phase in 2023. It will deploy containerized battery blocks to repower harbor and river vessels. The goal is to replace, at designated harbor sites, a spent power pack with one fully charged, all within five minutes.

White explained that maritime batteries have different utilization profiles than automotive or grid-storage batteries, the two applications that have dominated battery development. Work is ongoing now to align battery capabilities with maritime demands. White said that if development work by Blackstone Resources, a CD partner, is successful those advances will increase energy density and lower some process costs by half. 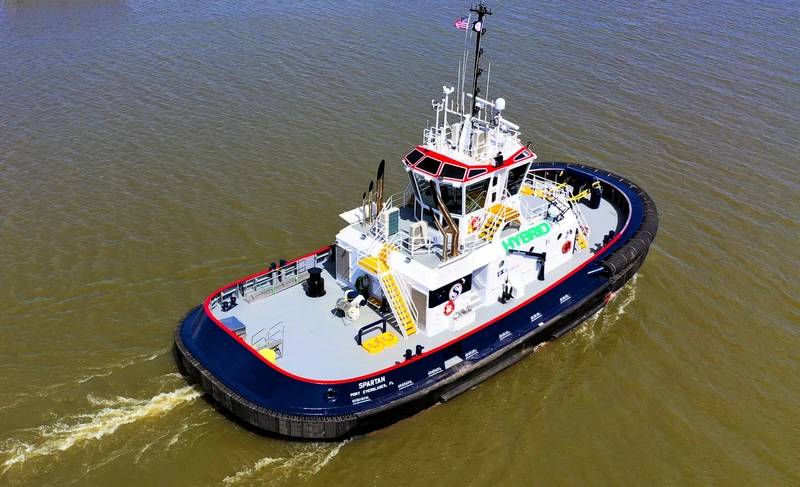 DOE’s big moves
The U.S. Department of Energy is making significant moves to spark battery development. Utility-level energy storage is one of DOE’s Earthshot initiatives. As noted above, DOE will spend $7 billion over five years on battery supply chain issues. This work isn’t singularly focused on maritime applications, but it will impact all transportation sectors. Critically, DOE wants related economic activity to take hold and expand in the U.S., so that U.S. citizens and markets benefit from the green energy transition.

In May, DOE announced plans to provide grant funding for research partnership projects that will establish the pathways to deliver lithium batteries to power transportation the way lead batteries are ubiquitously available to support transportation.

DOE writes that “batteries are a critical element to decarbonizing our economy and national competitiveness–for grid storage, for the resilience of homes and businesses, and for electrification of the transportation sector.” DOE projects that the lithium battery market will increase “five- to ten-fold by the end of the decade” and that it is “essential that the United States invests in accelerating the development of a resilient supply chain for high-capacity batteries.” These projects have to address other areas, including social goals, workforce opportunities and impacts on low- and moderate-income communities.

DOE is focusing on demonstration projects that fall into 12 “areas of interest,” including commercial scale cell manufacturing, extraction and processing, “next generation” materials and electrodes and commercial scale battery recycling. Each project area must be domestically focused.

Watch for decisions about project funding by the end of 2022 or early next year.