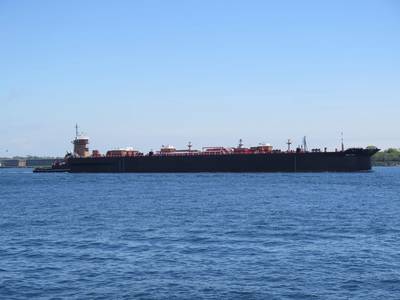 Shipbuilder Senesco Marine has delivered a new articulated tug and barge (ATB) to Reinauer Transportation Companies. The launch of the unit, including the 8,000hp tug and 150,000bbl barge, marks the largest such ATB constructed in the U.S. Northeast.

The ATB was built as an international SOLAS class unit and incorporates the latest build technology and equipment design, Senesco Marine said.

The RTC 165 is a grade “A” clean service barge measuring 515’4” x 73’7” x 41’ and authorized for international oil and chemical service. The barge is equipped with an electronic gauging system and Cargo Max loading system and has four independent segregated cargo systems that can load or discharge up to four products at the same time. The barge is outfitted with an independent vacuuming system for change of cargo, an independent ballast system contained in the double hull, and hydraulic 360 degree cranes for lifting.

Senesco Marine said it upgraded its facilities and infrastructure required to construct, launch and deliver the RTC 165. Senesco Marine recently constructed and added to the Senesco Repair Yard a 200’ Dry Dock with additional 50’ aprons, capacity of 2,100 LT used to transfer and launch the Bert Reinauer.

Senesco has delivered 30 vessels to Reinauer since 2005, with two more 4,000hp tugs slated for delivery later in the year.