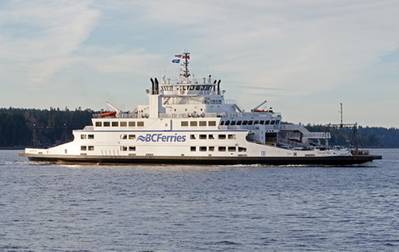 BC Ferries has awarded Remontowa Shipbuilding S.A. a contract to build an additional liquefied natural gas (LNG)-fueled vessel scheduled to go into service in the Southern Gulf Islands in 2022.This vessel will be identical to the three Salish Class vessels built by Remontowa for BC Ferries in 2016.

“Our Clean Futures Plan is our path to replace diesel fuels with clean erenergy options. While this cannot be achieved in a single step, we arecontinually seeking energy sources that offer a cleaner, lower carbon-intensity option todisplace non-renewable diesel,” said Captain Jamie Marshall, BC Ferries’ Vice President, Business Development & Innovation. “In our move toward a sustainable future, adopting LNG is one way to reduce our impact on the environment today.This new vessel will be our sixth ship fueled by natural gas.”

The 107-meter Salish Class vessel will have the capacity to carry at least 138 vehicles and up to 600 passengers and crew. It will allow for the retirement of the Mayne Queen, a diesel-fueled vessel. The ship will be powered by three Wartsila engines and electrically propelled by Schottel thrusters at each end, driven by an efficient gas-electric power plant. Onboard amenities include a Coastal Café, Passages retail store, children’s play area and a passenger lounge.

The ship will have a number of key features that support BC Ferries’ goal to be efficient and environmentally responsible throughout its system. Highlights of the Salish Class vessels include:

Request for Expressions of Interest (RFEOI) for the construction of the vessels to leading shipyards in Canada and around the world in July 2018. In the lead up to this process, BC Ferries raised awareness of the upcoming tender to Canadian shipyards through forums such as the Canadian Ferry Association, the Association of British Columbia Marine Industries and other local and national industry events. Canadian shipyards were invited to participate in the competitive bidding process.

BC Ferries received responses from 16 international shipyards and short-listed threeshipyards to proceed to the Request for Proposal (RFP) stage. No Canadian companies submitted a bid. Remontowa Holding is the largest shipbuilding capital group in Poland and the leader of the industrial sector in the region, incorporating 25 companies.