BIMCO: Global Container Volumes Projected to be Down 1.5% for 2020 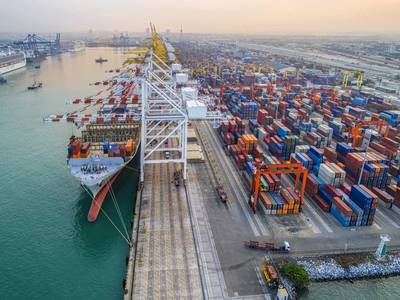 Despite the alarming headlines in the spring of last year, container shipping proved remarkably resilient in 2020 in terms of  volumes as well as freight rates. After a 5.0 million TEU (7.3%) drop in volumes in the first five months of the year, volumes were  down by only 1.7% -  a loss of 2.6 million TEU – by the end of November.

Of the three largest trades, Far East to North America has been the best performing, up by 1.1m TEU (6.4%) in the first 11 months of the year. The last few months have been the strongest for this trade, managing to more than make up for lost volumes in the early months of the year. This has caused problems for supply chains as the rush of containers have overwhelmed some ports.

Despite the fact that container volumes have been stronger in the last few months of 2020 than they were in 2019, both the Intra-Asia and Far East to Europe trades, they remain in negative territory when looking at it on an accumulated basis: down by 1.3% and 5.3% respectively.

“BIMCO now expects global container volumes to have fallen by less than 1.5% in 2020 , which is far better than what we anticipated when the pandemic raged in Q2, although even this figure hides how profitable a year it has in fact been for liner companies. Strong capacity management when volumes fell allowed them to minimize their loses, and they have since been able to cash in on low bunker prices and record high spot freight rates on many trades as volumes have improved,” says Peter Sand, BIMCO’s Chief Shipping Analyst.

“Looking ahead, the coming quarters will see a strong focus on the repositioning of empties and even out the imbalanced caused by the stop-n-go demand of 2020. Furthermore, focus will now turn towards the Chinese New Year, which is set to be different to any other in terms of both celebrations and exports.” 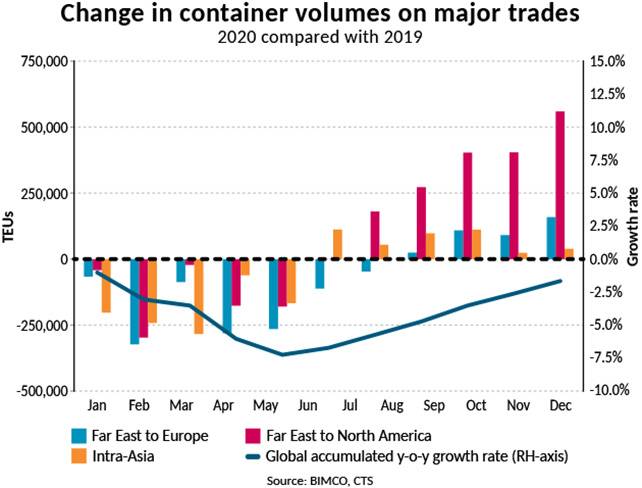