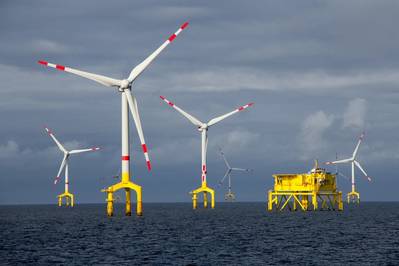 A U.S. government auction for three wind leases off the coast of Massachusetts ended on Friday with record-setting bids totaling more than $400 million from European energy giants including Royal Dutch Shell Plc and Equinor ASA.

Equinor and Mayflower each bid $135 million for their leases, while Vineyard Wind bid $135.1 million, BOEM said.

"We are truly blown away by this result," BOEM Acting Director Walter Cruickshank said on a conference call to announce the winners.

The amounts were by far the highest ever bid for a U.S. offshore wind lease. Equinor held the previous record of $42.5 million for a lease off the coast of New York.

President Donald Trump's administration is streamlining the permitting for offshore wind and carving out new areas off the coast for leasing to boost domestic energy production and jobs.

The same areas failed to sell at a 2015 auction, reflecting the industry's changing view of the potential of the United States as a market for offshore wind.

"Mayflower's entry into U.S. offshore wind is exciting," Mayflower Director John Hartnett said in a statement. A wind farm capable of powering more than 680,000 homes could come online by the mid-2020s in its lease area, Mayflower said.

Equinor said the new lease, combined with the New York lease it already holds, gives it a strong position within reach of important offshore wind markets.

Vineyard Wind, which is developing a wind farm in a separate lease area off the coast of Martha's Vineyard, said in a statement that the company was "excited to expand our offshore wind presence in the waters offshore New England."

(Reporting by Nichola Groom in Los Angeles; Editing by Rosalba O'Brien, Will Dunham and Jonathan Oatis