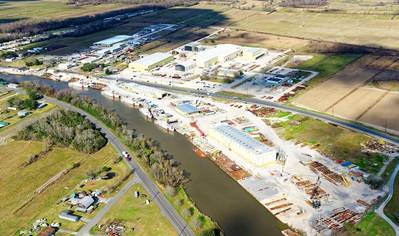 “I’ve always said Bollinger’s greatest strength is its people and I believe that wholeheartedly,” said Ben Bordelon, President and CEO of Bollinger Shipyards. “As we grow and expand, it’s important that the leadership team grow and reflect the organization – both where it is today and where we’re heading in the future. Today’s announcements strengthen our team, provide opportunities for efficiency and enhance growth within organization. I’m confident that we have the people, skills, capability and dedication to meet the needs of our customers, no matter how big or complex, and provide them with the highest levels of quality, support and service in our industry.”

Chris Remont has been named Executive Vice President and General Manager of Bollinger Mississippi Shipbuilding (BMS). In this role, Remont will oversee the facility’s ongoing and future programs and is responsible for execution and delivery. Remont was previously EVP for New Construction Programs at Bollinger.

Bob Merchant has been named Vice President of Operational Strategy & Integration. Bob will be responsible for the strategic overview of companywide functional business units. Specifically, he will review performance, synergies and operations plans to ensure support of Bollinger’s optimal strategy and best enable future growth and success. Merchant previously served as President and CEO of VT Halter Marine. Merchant spent most of his career at Ingalls Shipbuilding leading programs critical to both the business and the U.S. Navy and Coast Guard.

While Tim Martinez will remain the Executive Vice President of Repair for Bollinger, he will now oversee Bollinger Mississippi Repair (BMR).

Jeffrey Gehrmann has been named the General Manager of Bollinger Mississippi Repair.

Notably, all ongoing programs at VT Halter Marine and STEHMO were conveyed with the transaction, including the Polar Security Cutter (PSC) program for the U.S. Coast Guard and the Auxiliary Personnel Lighter-Small (APL(S)) program for the U.S. Navy. Those programs will continue to be built at Bollinger Mississippi Shipbuilding.