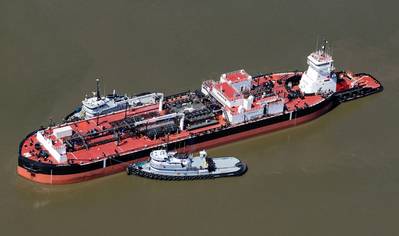 Crowley Fuels took delivery Tuesday of its new Alaska Class 100,000-barrel, articulated tug-barge (ATB), which will be used to transport petroleum products for the Alaska market, from Bollinger Shipyards.

The ATB is the first in Crowley’s fleet to be dedicated to the Alaska market. The barge is named Oliver Leavitt, in honor of ASRC’s former chairman and current member of the corporation’s board of directors, with the tug bearing the name Aveogan, Leavitt’s Iñupiat name.

The ATB was constructed at the Bollinger Marine Fabricators facility in Amelia, La., with on-site construction management by Crowley Shipping.

In addition, the ATB features a patent-pending closed loop, freshwater ballast system whereby the tug’s ballast will be transferred to-and-from a retention tank on the barge to account for fuel burn.  The design has been approved by the USCG and will eliminate the need to discharge tug ballast water into the sea.

The 128- x 42- x 21-foot tug is equipped with a fire monitor and foam proportioner, providing off-ship firefighting capabilities to the barge. The 400- x 85- x 32-foott barge is also outfitted with spill response gear and a hydraulic boom reel with 2,000 linear feet of inflatable boom to support spill response efforts.

The ATB was designed under the Safety of Life at Sea (SOLAS) Convention and it will be classed with the American Bureau of Shipping (ABS). The vessel was built with enhanced features to benefit the crew, including 45-degree sloped staircases, interior sound deadening and dedicated heads in each cabin.

AST Partners with the Liberian Registry for Iridium GMDSS