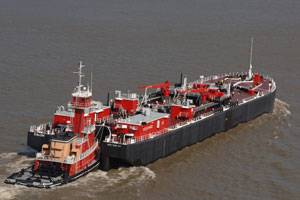 ATB Tug Rhea I. Bouchard and Barge B. No. 284 depart the New Orleans terminal with the barge’s first load of cargo following the delivery of the new barge from Bollinger Gretna, LLC.

Barge B. No. 284 is a manned ocean, clean oil tank barge measuring 399-ft, 11-inches long, with a 74-ft beam and a depth of 28-ft, 6-inches. The barge is built to, and certified by, American Bureau of Shipping and United States Coast Guard to meet the requirements of OPA’90 with 12 cargo compartments and three separate pumping systems. The barge is equipped with three Byron Jackson cargo pumps, driven by John Deere engines, Model 6125HF070 Series, and the deck is equipped with two Techcrane model C 30-60 electric-hydraulic cranes.

Since acquiring Bollinger Marine Fabricators in 1998, and Bollinger Gretna, LLC in 2000, Bollinger has delivered the marine industry 54 tank barges meeting the requirements of OPA’90.  Of the 54 barges, nine of the barges have been for Bouchard.

The B. No 284 is the second barge of a three barge agreement between Bollinger and Bouchard.  The B. No. 262, a 60,000 BBL OPA’90 compliant barge was delivered to Bouchard in April of 2009 and was the first of the three barge program.  The remaining barge to be delivered from Bollinger is the 60,000 BBL B. No 264, a clean oil barge scheduled for delivery in March 2010 from Bollinger Marine Fabricators, LLC.