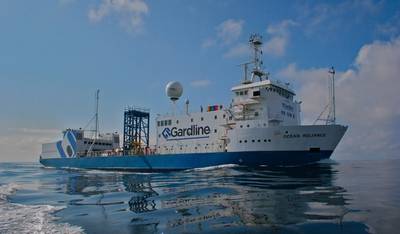 Netherlands based Royal Boskalis Westminster N.V. said it has acquired all shares of the U.K. based Gardline Group, a firm specializing in marine geophysical surveys, offshore geotechnical services and environmental surveys. The consideration paid including assumed debt amounts to approximately £40 million ($51.4 million).

Gardline was established in 1969 and was a second-generation family-owned business with principal offices in Great Yarmouth, U.K. with further activities in the U.S., Brazil and Singapore. The company operates 15 survey related vessels in addition to 25 smaller vessels including crew transfer vessels and survey catamarans, and it presently employs approximately 750 employees including a pool of 100 surveyors. Its current annual revenue is approximately £60 million to £70 million ($77.1 million to $90 million).
With the acquisition, Boskalis said it fulfills its ambition to build a position in the offshore survey market and become a specialist provider of subsea geotechnical surveys with an exposure to the renewables market and the early cyclical oil and gas market.
Boskalis said it does not expect the transaction to be EBIT accretive within the next few years dues to the challenging near-term outlook, though it believes the transaction positions the company well for when end-markets recover.

On 1 December 2020, Ingrid Uppelschoten Snelderwaard will take up the role as global COO of Svitzer A/S, reporting to CEO Kasper Friis Nilaus.