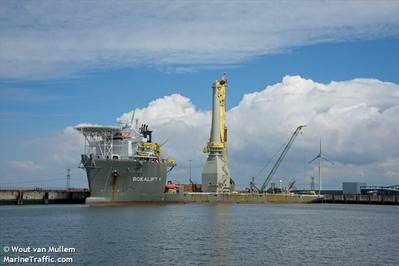 Dutch marine contractor Boskalis has won a contract to transport and install the monopile foundations and substations for an offshore wind farm development.

Boskalis did not say who the client was, nor where the project would be taking place, but said the value was around 450 million euros (around $515 million).

"Boskalis’ successful track record in offshore wind energy is founded in Europe and has expanded to Asia in recent years, and more recently to the US East Coast," Boskalis said, adding that its Bokalift 1 and Bokalift 2 crane vessels and versatile heavy transport fleet were ideally suited for large-scale offshore wind projects.

It did not say which vessels exactly would be deployed for the new contract.

"This contract ties up one year of crane vessel utilization days in addition to the equivalent of two years of heavy transport vessels. Engineering and pre-construction work has already commenced and project execution is scheduled to commence in 2023," Boskalis said.

The company, which apart from the offshore energy industry, is a major player in the field of dredging and towing services, last week said that within Offshore Energy, the third quarter had proceeded well but that the order book had decreased.

"Offshore wind projects in Taiwan and Europe contributed significantly to revenue within the contracting cluster. In the services cluster, Marine Transport & Services contributed significantly and Subsea Services, partly due to the integration of Rever Offshore, maintained the strong performance from the first half of the year. The utilization of the heavy transport vessels was fractionally lower compared to the first half of the year, while the rest of the fleet (diving support-, crane-, survey-, cable laying- and fall pipe vessels) was better utilized.