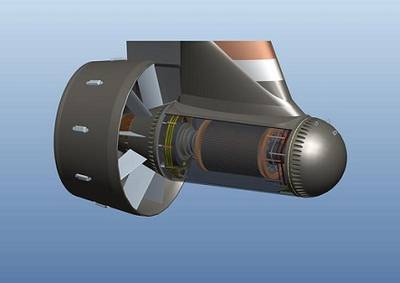 GE’s Inovelis pump jet is a breakthrough in electrical thruster design and provides higher efficiency over a wider range of operations and in dynamic positioning. Photo: GE

In a move that could change the way the maritime industry views propulsion technology, GE’s Power Conversion business increased its offshore systems portfolio with Inovelis, a podded thruster with unmatched fuel efficiency and overall performance.

Inovelis incorporates an electrically powered propeller with its motor housed within a steerable pod mounted beneath the hull of an offshore vessel. It incorporates all the assets of a podded thruster, including maneuverability, responsiveness and excellent fuel economy. Based on pump jet principles, it features fixed stator vanes and a nozzle that act together to guide the water flow across the impeller blades, substantially enhancing propulsion efficiency. Its compactness enables an even greater degree of integration between the hull and the propulsion unit, further influencing the ships’ fuel economy and emissions.

Pump jet technology was originally used in submarines and is already used for high-speed surface vessels. Now GE is applying it to offshore platform support vessels (PSVs). The Inovelis solution has higher thrust capability than a more conventional propulsion system, as well as improved hydrodynamics, providing higher efficiency over a wider range of operations, in dynamic positioning (DP) and in transit, the manufacturer says. A traditional propulsion setup for a PSV has a large propeller with a nozzle, which has reduced performance when the speed of the ship increases.

Whereas a vessel with a traditional propulsion system has a propeller pushing on the water, a pump jet draws in water and then forcibly ejects it out through a nozzle. It is the marine equivalent of a jet engine, except that while jet engines are fixed, Inovelis can be pointed in any direction on a horizontal plane.

Inovelis is a system designed to best suit the performance and fuel efficiency needs of both modes of operation, transit and DP. Its PSV is driven by two 2.5-megawatt Inovelis pods, operating 30% of the time in transit at full speed.

Inovelis uses GE’s innovative induction motor technology, which brings further reliability and helps reduce maintenance requirements. In fact, the pod has a “no man access” design, which helps reduce overall size and provides an additional differentiation from other designs.

GE already has received a number of orders all destined for large PSVs. The first is scheduled for delivery in the second quarter of this year, with ship commissioning around the end of the year.GE Power Conversion’s product and system portfolio for offshore vessels includes power generation, electric propulsion, drilling systems, DP and ship automation systems.