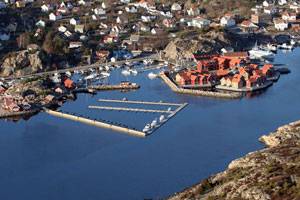 Norway is known for its harsh winter storms.  When Skjærhalden Båtforening needed to expand its marina, it was forced to move outside the fixed breakwater and face up to 5 ft waves.  SF Marina USA's Norwegian partner SF Pontona Norge AS was willing to install a harbor at this exposed location.

In the winter of 2008 after days of hard, 34 mph winds, Skjærhalden Båtforening's new harbor was put to the test as storm Tuva moved in with 67 mph winds.  Even in these extreme conditions, SF Marina's breakwaters remained within the regulated area and continued to attenuate the waves.