Cruise Ships Smarten Up in Bremerhaven 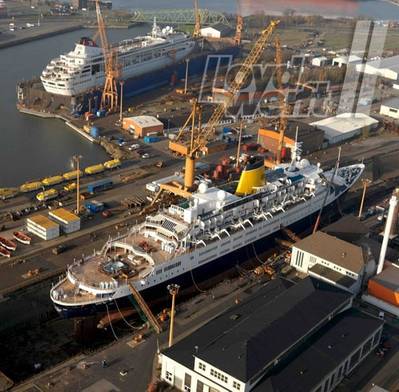 Three big cruise ships visit Lloyd Werft Bremerhaven AG in the coming days and weeks to be spruced up for the 2013 cruise season.

In the meantime Cunard’s 294 m long, 90,049 gt cruise ship "Queen Victoria" has returned to passenger service. That came after the original contract was extended to include the additional installation of a new type of exhaust gas cleaning plant or scrubber. It was the first such installation ever carried out by Lloyd Werft on a cruise ship.

Another first was the docking at Lloyd Werft of the 196 m long, 24,344 gt MS "Braemar and the acquisition of her owner Fred Olsen Cruise Lines as a new customer. The ship was docked up to November 21st for extensive maintenance and repair including the complete overhaul of her stabilisers and the removal of both rudders. The funnel deck on the cruise ship, built in Valencia in 1993, was also being doubled in size. Work was carried out on the ship’s piping system and steel works were also undertaken.

The 191 m long and 24,492 gt MS "Saga Ruby" docked in Lloyd Werft’s big Kaiser Dock on November 15th.  Saga Shipping Corporation, a subsidiary of the English insurance concern Acromas Holidays, bought the cruise liner in 2004. "Saga Ruby", built in 1973, made a name for herself as the dream cruise ship "Vistafjord" and was for two years the main participant in the first of a series of popular German TV shows of that name.