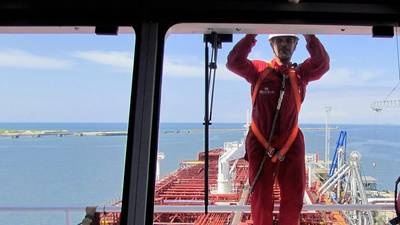 UK Chamber of Shipping said that no deal could limit the opportunities for UK seafarers. A no-deal Brexit would also potentially inconvenience operators of UK-flagged ships, the UK Chamber says.

On Thursday, the UK Government published another 28 technical notices, which advise on how potential disruption from a no-deal exit from the European Union can be minimised.  The latest batch includes two important shipping-related notices: one on seafarer certification and one on maritime security.

The UK Chamber’s immediate concerns are focused on how seafarer employment would be affected by a no-deal Brexit.

The technical notice on seafarer certification identifies the basis for seafarer employment in STCW; the requirement for a Certificate of Competency (CoC) and a Certificate of Equivalent Competency (CEC), and the methods of recognition for those certificates. It then goes on to explain the legal basis of existing CoCs and CECs in a no-deal scenario, recognising the continued validity of such certificates until their stated expiration date.

“The UK will need to secure recognition by the European Commission as a third country if UK CoCs are to be accepted for service on ships registered under EU flags,” explains Tim Springett, the UK Chamber’s Policy Director.

“Our discussions with Commission officials indicate that they see this as a straightforward process, but clearly in a no-deal scenario it cannot be taken for granted.”

The UK Chamber welcomes the Government’s intention to continue accepting CoCs from other EU Member States, as this will ensure that operators of UK-flagged ships will be able to use European sources to meet any shortfalls in the supply of ships’ officers.

“However, if the UK ceases to have a relationship with EMSA, it may no longer be able to rely on the latter’s assessments of member states’ training and certification systems to meet its obligations under the STCW Convention to evaluate other countries’ system,” warns Mr Springett.

“We urgently need confirmation from the Government that it is aware of this and is taking appropriate steps to address the matter,” he continues.

The UK Chamber of Shipping encourages the Government to negotiate a long-term agreement for the continued reciprocal recognition of UK and EU seafarer certificates.

The technical notice on Maritime Security is informative but contains little information that is new.

The Government recognises the current exemption for UK-EU scheduled services from security declarations. The requirements are based on IMO International Ship and Port Facility Security Code (ISPS Code) requirements.

In the event of a no-deal Brexit, maritime stakeholders would need to prepare for the loss of the EU exemption. The notice suggests that companies who presently hold exemptions should prepare for a scenario where pre-arrival information will need to be submitted to the EU ports from which their services operate.

The Chamber plans to work with the Department for Transport to determine exactly how such declarations for ferries operating frequent and regular services will be submitted and how the data set might be simplified for such services.

Elsewhere, the UK Chamber is pleased to receive the guidance on how a no-deal scenario would affect international driving permits, oil and gas exploration licensing and passports.