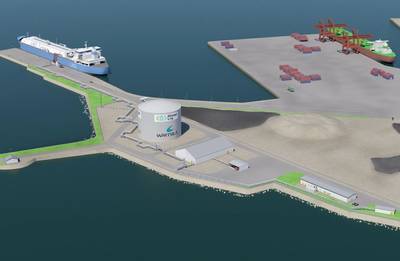 Wärtsilä has been given full notice to proceed (NTP) from Manga LNG Oy for the supply of a liquefied natural gas (LNG) import terminal in Tornio, Northern Finland. Wärtsilä will commence construction on the site near the port of Tornio in January 2015. Manga LNG Oy is a joint venture of Outokumpu Group, Svenskt Stål AB (SSAB), Skangass and EPV Energy Ltd.
Wärtsilä initially announced this project in January 2014. The order, valued at approximately EUR 100 million, will be included in Wärtsilä's order intake in December 2014.
The turnkey delivery of the first import terminal supplied by Wärtsilä includes complete unloading, storing and regasification equipment for LNG. The capacity of the LNG storage tank will be 50,000 cubic meters. A 10-year maintenance agreement was also signed between the parties. The first maintenance agreement for an LNG terminal complements Wärtsilä's service proposition and experience within dual fuel and gas engines and related equipment.
One of the main users of the imported natural gas will be the Outokumpu Tornio steel mill. A gas pipeline will be built to the nearby Röyttä industrial site, where the mill is located. Additional potential gas users are mines, factories and other industrial customers in Northern Finland and Sweden. Railroad and truck transportation from the terminal will be available. The terminal can also be used for LNG bunkering as well as to supply fuel for LNG-powered ships.
"The world is switching to natural gas, and we make it available in new places. With our unique turnkey offering, we are ready take a leading role in end-to-end LNG systems," said Tore Björkman, Vice President, LNG and Nuclear, Wärtsilä Power Plants.
smartpowergeneration.com
wartsila.com