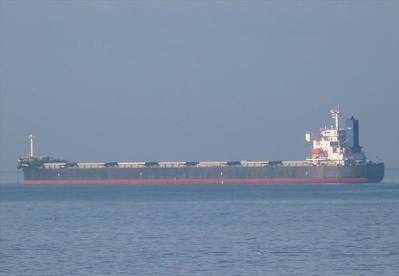 An ailing mariner was medevaced from a bulk carrier near Cold Bay, Alaska, the U.S. Coast Guard said.

At approximately 1 p.m. on Wednesday, the 17th District Command Center watchstanders received a call from the Alaska Maritime Agency in Dutch Harbor reporting the 42-year-old crew member was suffering from a possible stroke aboard the bulk carrier Restinga, 140 miles south of Dutch Harbor.

Both Coast Guard assets arrived on scene at approximately 4:30 p.m. and the helicopter aircrew successfully deployed a rescue swimmer to recover the patient for transport to Dutch Harbor, where they conducted a wing-to-wing transfer with a LifeMed crew, who then transported him to Anchorage for further care.

“Two assets were used to complete the medevac due to the vessel’s distance offshore,” said Petty Officer 1st Class Dustin Lake, an operations specialist stationed at the command center in Juneau. “The MH-60 was the asset conducting the hoist while the C-130 was there as a communications platform. In the event something happened to the helicopter, they would be there to drop lifesaving rescue equipment. Having a secondary aircraft is a common procedure in the Coast Guard and reduces the risk during operations conducted so far offshore.”