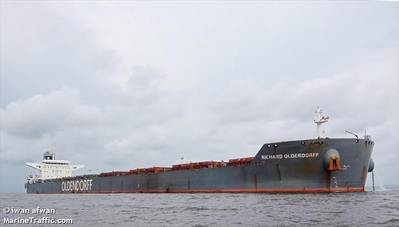 An ailing mariner was medevaced from a Liberian-flagged bulk carrier anchored off Corpus Christi, Texas, the U.S. Coast Guard said.

Coast Guard Sector/Air Station Corpus Christi command center watchstanders received a medevac request at 1:03 p.m. Friday from the agent of the 260.4-meter Richard Oldendorff off Port Aransas, Texas, stating a crewmember was suffering from a possible leg infection. Watchstanders consulted with the duty flight surgeon, who recommended a medevac.

The Pelican crew took aboard the crewmember and transferred him to the RB–M once it arrived on scene. The RM–M crew transported the crewmember to Seamans Wharf where emergency medical services personnel were waiting. EMS transported him to Spohn Hospital Corpus Christi - Shoreline in stable condition.

The 2011-built Richard Oldendorff is currently anchorage near Corpus Christi, having departed Hazira, India in January, according to AIS tracking data.