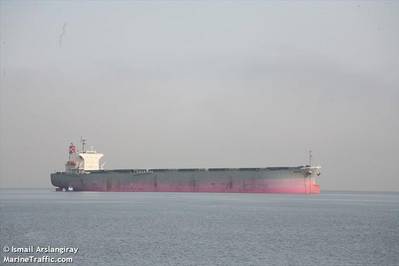 The vessel Aeolian Grace, loaded with some 65,000 tonnes of soybeans, has been stranded in Brazil's São Francisco do Sul port since Wednesday, authorities said in a statement on Thursday.

Authorities said they were still evaluating whether there were any damages to the ship and had not identified any oil leaks.

In a telephone interview, a press representative for the port authority said ship movements were authorized to resume on Thursday afternoon, with partial restrictions depending on the vessel's size.

As operations gradually restart, the Bunga Lilac vessel received permission to maneuver and offload about 5,000 tonnes of vegetable oil, the press person said.

Four ships currently are waiting to load soy at São Francisco do Sul, according to the press office.

The stranded ship's destination was Singapore, according to authorities at the state-owned port of São Francisco do Sul in the southern state of Santa Catarina.

The vessel was chartered by Xiamen C&D and was destined for China, according to data compiled by shipping agent Cargonave.

On Wednesday, the shipping agent said all berthing and unberthing at the port was canceled after a problem occurred during maneuvering by the Aeolian Grace.

The soy vessel unberthed at 37 minutes after midnight on Wednesday, at which time sea and wind conditions were adequate for departure, port authorities said.

Last year, 5.7 million tonnes of Brazilian grains, including soybeans and corn, were exported out of São Francisco do Sul, according to Cargonave, which ranked it as Brazil's eighth largest grains port in 2019.