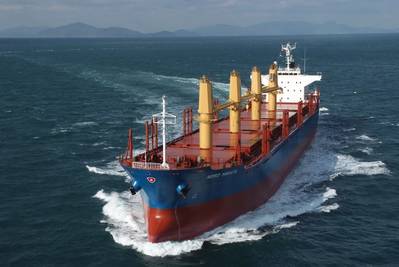 Capesize rates 26-33 pct higher than a year ago, but could fall towards Chinese New Year.

With Christmas and New Year holidays looming, rates could drop for at least the next six weeks until after Chinese New Year at the end of January, brokers said.

"Rates are likely to meander down until they find support from iron ore and fuel prices," a Singapore-based capesize broker said on Thursday.

Rates from Western Australia to China could drift closer to $4 per tonne from around $6 currently and below $10 for the Brazil-China route from about $12 now before a possible increase after Chinese New Year.

"I don't think owners are too confident. There's limited chartering activity and cargo volumes are not enough to sustain the number of available ships," a Shanghai-based broker said. The Shanghai broker sees a low of around $5 per tonne from Australia and above $11 from Brazil.

"The capesize market still looks relatively good but people forget how bad it can get," the Singapore broker said. "If charterers have a choice of 10 ships they'll wait until an owner accepts the rate they want to pay."

Rates from Brazil and Australia to China on Wednesday dropped to the lowest since Nov. 10, chartering data showed.

Charter rates for iron ore cargoes from Western Australia-China slipped to $5.94 per tonne on Wednesday from $6.26 per tonne a week ago.

Charter rates for smaller panamax vessels for a north Pacific round-trip voyage were flat at $8,637 per day on Wednesday from $8,594 last week.

Freight rates in the Far East for smaller supramax vessels remained firm with rates of $6,000 per day from India to China and $5,000-$6,000 per day for voyages from China to Southeast Asia, Norwegian ship broker Fearnley said.

The Baltic Exchange's main sea freight index dropped to 1,162 on Wednesday from 1,204 a week ago.