For those operating equipment on, under or near the water for commercial or recreational purposes, the corrosive effects of saltwater can be costly. For the U.S. Navy, the ramifications could be much more severe.

As a doctoral student in mechanical engineering and applied mechanics at the University of Rhode Island, Irine Neba Mforsoh studied the long-term effects seawater and ultraviolet radiation have on the materials used to coat marine structures.

After earning her doctorate in spring 2021, the first-generation college student is now applying what she has learned as an engineer at the Naval Undersea Warfare Center Division Newport.

Staying with a relative in Iowa, Neba Mforsoh decided to enroll in a doctoral program, which is when she met Arun Shukla, professor of mechanical engineering at URI.

"Prior to moving to the United States, I was working as a lecturer at a university in Cameroon and pursuing a Ph.D.," said Neba Mforsoh. "It was critical for me to continue to expand my knowledge so that I could provide the best possible instruction to my students. I decided to continue my education at URI because the University accepted my international credentials and everyone I met was very welcoming."

"Irine visited my Dynamic Photomechanics Laboratory at URI to discuss her intention to work under my guidance for her doctoral dissertation," said Shukla. "Her language skills were superior, her leadership qualities were evident, and I was impressed with the effort she made prior to our meeting to understand the type of research we conduct in the lab." 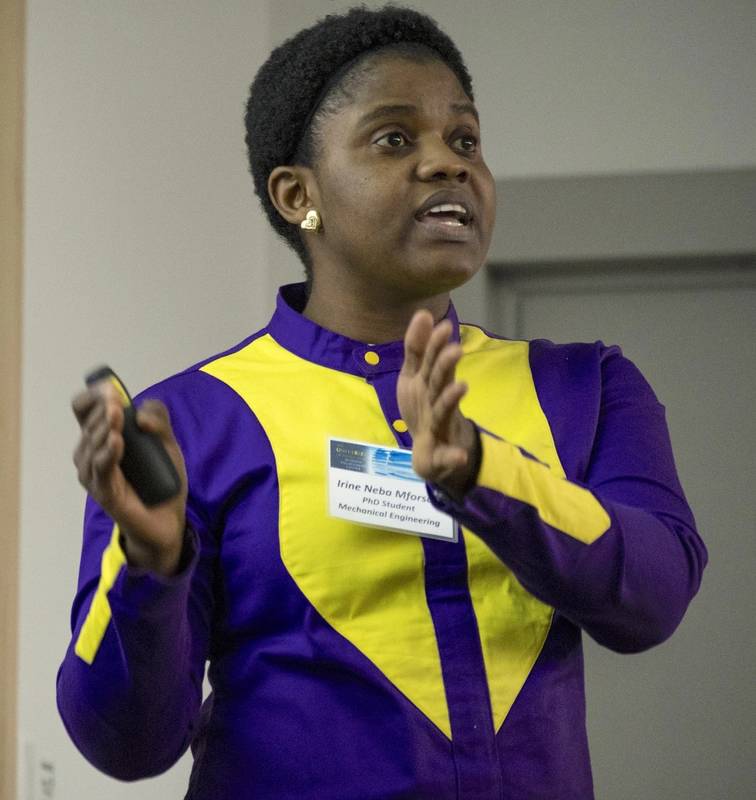 Irine Neba Neba Mforsoh gave a presentation at URI in 2018 on the advantages of using composite materials in bridge construction. (URI photo by Nora Lewis)

Shukla recommended that Neba Mforsoh apply for the Naval Engineering Education Consortium program, through which her studies would be funded by the Naval Undersea Warfare Center and she would get to work on a research project started by the professor. Neba Mforsoh was accepted into the program and dove into her research.

"I quantified the changes to the mechanical properties of elastomers (a natural or synthetic polymer having elastic properties) after exposure to seawater and ultraviolet radiation," said Neba Mforsoh. "I studied the changes in elasticity, adhesion to surfaces and energy absorption capabilities."

"Marine structures will be designed with an understanding of material properties and the effects of extreme loading conditions in the ocean environment, increasing reliability," said Neba Mforsoh. "My research included diagnostics to determine why certain components in ships, such as cable connectors, fail prematurely at the interface. This research can be used to solve this problem and optimize future designs."

Once of Neba Mforsoh's mentors on the project was James LeBlanc, chief scientist of the Naval Undersea Warfare Center's platform and payload integration department.

"When presented with a problem of interest to the Navy, Irine designed experiments that would produce the results we were interested in," said LeBlanc. "Her testing was always well thought out and executed with attention to detail."

Besides her doctoral studies, which culminated with her dissertation, Neba Mforsoh has engaged with and impressed the Navy on several other occasions.

Neba Mforsoh was accepted into the prestigious Naval Research Enterprise Internship Program in 2020. When the 10-week program was canceled due to COVID-19, the Naval Undersea Warfare Center enabled her to do an internship at its facility in Newport during the summer of 2020.

"I worked on the adhesion behavior of polymers/metallic interfaces, material characterization, data analysis on the fracture behavior of saturated carbon/epoxy and glass/epoxy composites when subjected to low temperatures, battery testing and I assisted in marine mammal impact research," said Neba Mforsoh.

Later in the year, Neba Mforsoh was informed that she could do a virtual version of the Naval Research Enterprise Internship Program, which she did in November to December 2020 for the Naval Surface Warfare Center, Philadelphia Division.

Shukla has mentored 105 graduate students at URI (30 of whom were doctoral students). According to the professor, Neba Mforsoh was the first female African American mechanical engineering doctoral student at URI.

She finished her doctoral courses with a perfect 4.0 grade point average. Among her other accomplishments and awards were:

As an engineer at the Naval Undersea Warfare Center, Neba Mforsoh is contributing to the Navy's research on coatings and additive manufacturing.

"Irine has such a wealth of knowledge that she is able to work in many different technical areas at NUWC," said LeBlanc. "As an intern, she supported projects in material science, chemistry, and power/energy. More importantly, she is able to interact with senior researchers in a professional manner and has a continual desire to learn and grow as a NUWC employee."