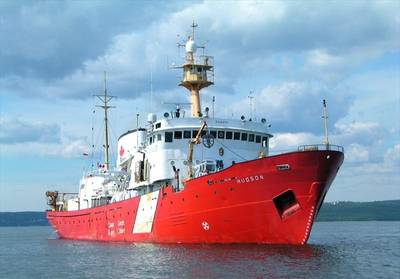 The Canadian Coast Guard is decommissioning its oldest serving vessel after 59 years of service.

The offshore oceanographic and hydrographic survey vessel CCGS Hudson, taken out of service after a starboard propulsion motor failure in November 2021, will be decommissioned due to the scale of the problem and the time and cost to repair it, combined with the costs associated with an upcoming period of regulatory compliance work.

"It has been determined that the ship is beyond economical repair and further investment would not allow it to return to reliable service," the Coast Guard said on Wednesday.

Built at Saint John Shipbuilding, the 90.4-meter-long CCGS Hudson entered service in 1963 as the first Canadian ship constructed specifically for hydrographic and oceanographic survey work. The long-serving vessel was a key platform for Fisheries and Oceans Canada’s oceanographic science program.

While there are no science missions planned for the CCGS Hudson over the winter months, the vessel’s permanent replacement, the yet to be named Offshore Oceanographic and Science Vessel, isn’t expected to be delivered until 2025. The Canadian Coast Guard said it is working with Fisheries and Oceans Canada to evaluate the near and long terms impacts on programming and developing a plan to mitigate these impacts. Discussions are focused on which parts of the science program can be completed by other Canadian Coast Guard vessels, by chartered vessels, or through the use of other technology, the Coast Guard said.