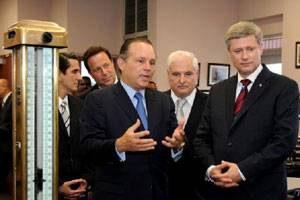 “We are honored to welcome Prime Minister Harper,” said Alemán Zubieta. “His visit underscores the importance of Panama’s strategic partnership with Canada, and we look forward to increased trade and more opportunities in the years to come, particularly with an expanded Canal.”

Expansion will build a new lane of traffic along the Panama Canal through the construction of a new set of locks, which will double capacity and allow more traffic and longer, wider ships.

Additional highlights from the Prime Minister’s Canal visit included tours of the Miraflores Locks and the Control House.