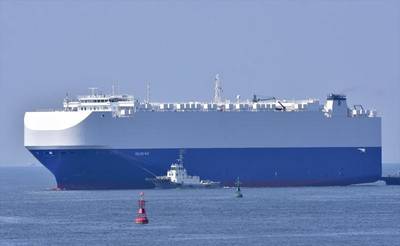 An Israeli-owned ship hit by an explosion in the Gulf of Oman strategic waterway has arrived at a port in Dubai, where is it is due to be assessed in dry dock.

The MV Helios Ray, a vehicle-carrier ship, was hit overnight between Thursday and Friday by a blast above the water line that a U.S. defence official said ripped holes in both sides of its hull.

Israel’s defense minister on Saturday said that an initial assessment had found that Iran was responsible for the explosion. There was no immediate comment from Iranian officials.

The blue and white ship is now berthed in Dubai’s Port Rashid, having sailed from its position off the coast of Omani capital Muscat, where the explosion occurred.

The Gulf of Oman links to Gulf waters via the strategically important Hormuz Strait, a narrow passage between Iran and Oman through which almost a fifth of the world’s oil passes.

A spokesman for Dubai state port operator DP World, which owns and operates the dry docks, had said earlier on Sunday that the ship was due to arrive on Monday for assessment.

The MV Helios Ray is owned by Tel Aviv-based Ray Shipping Ltd through a company registered in the Isle of Man, a U.N. shipping database shows.

Tensions have risen in the Gulf region since the United States reimposed sanctions on Iran in 2018 after then-President Donald Trump withdrew from Tehran’s 2015 nuclear deal with major powers.

Since then Washington has blamed Iran for a number of attacks on shipping in Gulf waters, including two Saudi oil tankers. Iran distanced itself from those attacks.