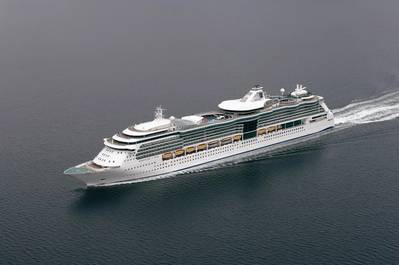 Royal Caribbean International’s newly revitalized 2,360-passenger Serenade of the Seas arrives at the Port of New Orleans’ Julia Street Cruise Terminal Dec. 12 to sail weekly itineraries through April. The 965-foot cruise ship was completely refurbished in December 2012 and replaces Royal Caribbean’s Navigator of the Seas, which was home-ported in New Orleans during the 2012-2013 cruise season.

Sleek and sunlit, Serenade of the Seas features panoramic views and wide open spaces, as acres of glass enclose a nine-story central atrium. The ship features an array of new dining options, three pools, including an adults-only retreat and 16 bars, lounges and nightclubs. Serenade of the Seas also features the new Centrum experience, which includes the 60’s-inspired R Bar as well as a multitude of entertainment experiences in the five-story Centrum, including enriching daytime activities, dazzling nighttime entertainment and a new high-flying experience where aerialists glide through the atrium.

“We are happy to have Royal Caribbean return this year and bring this magnificent ship to New Orleans,” said Gary LaGrange, Port President and CEO. “Royal Caribbean is a perfect fit for the New Orleans tourism demographic and offers a wide variety of itineraries throughout the Bahamas and the Caribbean.”

“We are excited to be back in New Orleans with a newly revitalized Serenade of the Seas,” said Vicki Freed, senior vice president, sales, Royal Caribbean International. “Guests sailing from New Orleans will enjoy a Caribbean vacation like no other aboard one of our unrivaled and most innovative ships.”

“Royal Caribbean is an important long-term partner to New Orleans’ tourism industry and we are so grateful to them for bringing the Serenade of the Seas,” said Stephen Perry, president and CEO of the New Orleans Convention and Visitors Bureau (CVB.) “The CVB will continue to devote our sales, marketing and public relations resources to promote Royal Caribbean cruises from our Port and the city of New Orleans as the perfect pre- and post-cruise vacation destination for our international visitors.”

Cruising is big business in New Orleans, as Cruise Line International Association (CLIA) ranked the Port the sixth-largest cruise port in the United States in 2012. An economic impact study performed by the association found cruise spending was up 42 percent last year in Louisiana to $399 million; and the industry generated 7,548 jobs, compared to 5,512 jobs the prior year, resulting in $294 million in personal income.

In conjunction with the CLIA report, Port officials retained Business Research and Economic Advisors (BREA) to determine passenger and crew spending in the New Orleans region. The BREA study found more than 80 percent of cruise passengers are from out of state and 60 percent of them spend an average of two nights in New Orleans either before or after their cruise. That figure is up from 50 percent in 2010, the last year the Port measured passenger and crew spending. In addition, those passengers and shipboard crew spent $78.4 million in 2012, with lodging ($27.5 million) and food and beverage ($8.3 million) encompassing more than half of the overall spending.