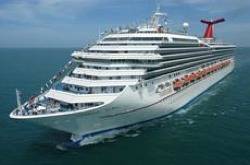 The line says it once again will deploy the 2,974-passenger Carnival Glory to the city for a series of four- and five-night sailings to Canada starting in early June with departures through early July. The four-night voyages will include a stop in Saint John, New Brunswick, and the five-night trips will stop at Saint John and Halifax, Nova Scotia.

The Carnival Glory also will sail three seven-night cruises out of Boston in 2013 that include stops in Portland, Maine; Saint John; Halifax; and Sydney, Nova Scotia. Departure dates are June 9, July 14 and July 21.

Carnival has offered a handful of cruises out of Boston in the past but until this year never an extended season of voyages. The Carnival Glory begins its first deployment in Boston in early June, sailing from the recently refurbished Black Falcon Cruise Terminal.