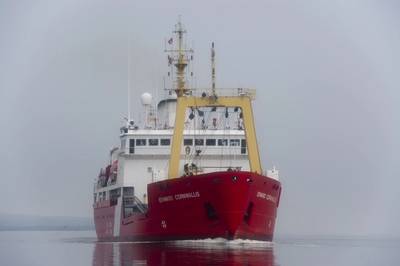 The 34-year-old light icebreaker CCGS Edward Cornwallis is a high-endurance multi-tasked vessel launched in 1986 and built by Marine Industries from Tracy, Quebec. The 83-meter-long vessel performs icebreaking and buoy tending operations and is homeported at the Canadian Coast Guard Base in Dartmouth, Nova Scotia.

Work under the life extension contract will include the replacement of main engines, a new heavy lift crane, a new bow thruster and hull coating, all expected to take place from April 2020 to January 2021. The vessel will also undergo regulatory work such as, pulling and inspecting the tail shafts, seals, stern tubes, propellers and rudder. In addition, miscellaneous regulatory surveys of the sea bays, sea chests and void spaces will be conducted.

The contract, announced by Bernadette Jordan, Minister of Fisheries, Oceans and the Canadian Coast Guard, on Monday, was awarded under the repair, refit and maintenance component of the National Shipbuilding Strategy (NSS) and will help support up to 55 jobs at Shelburne Ship Repair, a yard in Nova Scotia operated by Irving Shipbuilding.

The work is part of the Canadian Coast Guard’s Vessel Life Extension Program, which ensures Coast Guard vessels are kept in safe and reliable working condition, in accordance with Transport Canada inspection requirements.

“Through this life extension project for the CCGS Edward Cornwallis, the Government of Canada is investing $12.1 million in Shelburne Ship Repair and ensuring that we have the icebreaking capabilities needed to best serve our coastal communities in Nova Scotia and around the country,”  said Anita Anand, Minister of Public Services and Procurement.

Since the launch of the NSSy, more than $7.5 billion in contracts has been awarded under the repair, refit and maintenance pillar of the strategy.