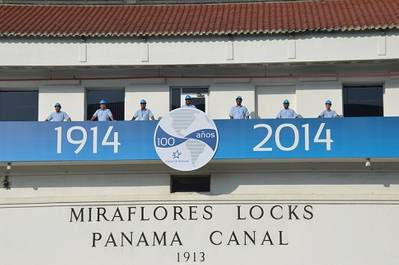 The Panama Canal Authority (ACP) began the countdown for the centennial celebration as it commemorates its 99th anniversary. The countdown’s events will highlight the waterway’s contribution during the past 100 years and the efforts underway to face the challenges of the upcoming decades.

The countdown began with the presentation of the Panama Canal Centennial logo on the control house balcony at the Miraflores Locks in a ceremony attended by members of the ACP Board of Directors and Panama Canal executives.

“During the year of celebration that we start today, we will pay tribute to the different representations of human ingenuity that made uniting two oceans a possibility,” Panama Canal Administrator Jorge L. Quijano said. “These representations include the human epic, the technological innovations, and the cultural, economic and social impacts that will forever define the Panama Canal in the world.”

The Canal’s Impact
Since its opening 99 years ago, the Panama Canal has impacted the world in different areas, making its construction and operation possible. The Panama Canal has become a facilitator of international trade by making distances shorter, reducing costs and navigational times to get goods to the market faster.

“The Panama Canal has connected the world since August 15, 1914,” ACP Board of Directors Chairman Roberto Roy said. “Proof of this is the 14,000 ships that transit each year, reaching 1,700 ports in 160 countries.”

The construction of the Panama Canal was possible through the contribution of more than 56,000 men and women from all around the world. This mixture of cultures provided the foundation for Panama’s rich cultural diversity.

Committed to the protection of the natural resources, the Panama Canal has become a leader in new and innovative environmental protection programs and reforestation initiatives to ensure the coexistence of humans with their natural surroundings.

Honoring its past, the Panama Canal Centennial will highlight the present operations of the waterway, while emphasizing how it prepares to face the challenges of the next couple of years through the Expansion Program.

The Centennial Logo
The Centennial logo is the result of the work of ACP professionals. It symbolizes the country’s role of connecting the world through the routes that converge in the waterway, with the Panama Canal logo as the main focus.

The design shows the silhouette of the Isthmus of Panama with the 100-year mark of this historical celebration. The logo will be placed in all activities and official publications of the Panama Canal.

Activities for the Centennial
“We will do our best to make this a celebration for all Panamanians and the international community alike,” Administrator Quijano said. “We will hold different events throughout the year highlighting the aspects that have made the Panama Canal an international symbol.”

As part of the countdown, the Panama Canal Authority will host several commemoration of historical and cultural events, as well as publish books about the waterway’s impact.

The first event will be the exhibition “The Panama Canal and its Architercural Legacy (1905-1920) which will be inaugurated August 21 in the City of Knowledge in Panama City, with the collaboration of the Fundación Arte y Cultura.