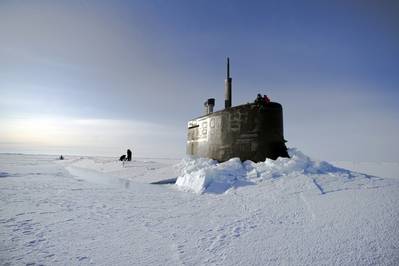 In the coming decades, as multi-year sea ice in the Arctic Ocean recedes, previously unreachable areas may open for maritime use for a few weeks each year. This opening maritime frontier has important national security implications and impact required future Navy capabilities.

"Our goal is to have the Arctic continue to unfold peaceably," said Vice Adm. Michelle Howard, Deputy CNO for Operations, Plans and Policy. "Working with our maritime and inter-agency partners, and by investing smartly in future capabilities, we can contribute to a secure and stable Arctic region."

The Arctic Roadmap, updated from its original 2009 version, includes an implementation plan that outlines the Navy's strategic approach to developing capabilities to operate in the Arctic Ocean, and the ways and means to support the desired Department of Defense and National Strategy end states.

To plan for the changing Arctic environment, Greenert directed the Navy's Task Force Climate Change (TFCC) to produce an assessment of how ice coverage will change in the Arctic, and its impacts on the Navy.

The task force assembled an interagency team of Arctic experts from various Navy offices, the National Oceanic and Atmospheric Administration, the National Ice Center, the U.S. Coast Guard, and academia to develop a consensus assessment based on available predictions by climate scientists. The task force identified key missions the Navy should be expected to perform, such as maritime security (including support to the Coast Guard for search and rescue), sea control, freedom of navigation, and disaster response/defense support of civil authorities.

"As the perennial ice melts and open water is available for longer periods of time, we are committed to expanding our Arctic capabilities," said Rear Adm. Jonathan White, Oceanographer of the Navy and TFCC director.