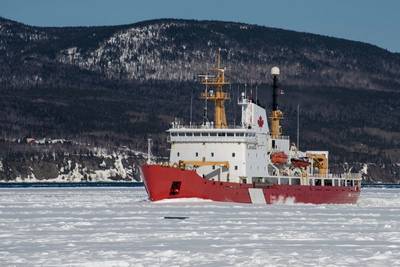 Back in May, Canada’s Government announced its intention to add a third Canadian shipyard as a partner under the NSS, and on August 2, it launched the competitive process to select the new yard to build six program icebreakers for the Canadian Coast Guard.

According to the Government of Canada, Chantier Davie has demonstrated it meets initial requirements related to experience, capability and capacity, as defined in the Invitation to Qualify issued in August.

“The announcement is a critical milestone in how we are able to adapt the strategy to meet Canada’s evolving federal shipbuilding needs, all while ensuring the members of the Coast Guard have the equipment they need to do their important work,” said Anita Anand, Minister of Public Services and Procurement.

Chantier Davie will now move to the next stage in the selection process, the Request for Proposal and evaluation stage. This will include a third-party assessment of the shipyard’s infrastructure, submission of a formal proposal, and a due diligence process to ensure the shipyard is financially capable of performing the work and making any necessary upgrades to its infrastructure. This assessment is similar to the process previously undertaken in 2011 to select Canadian shipbuilders Irving Shipbuilding and Seaspan Shipyards as strategic partners under the NSS.

Once this phase is completed, the Government of Canada will begin negotiations for an umbrella agreement, which is expected to be put in place in late 2020.

Alex Vicefield, Chairman of Davie Shipbuilding commented, “The historic announcement marks the beginning of a multi-generational program which will span the next three decades and sustain Davie’s position as a global leader in the delivery of specialist, mission-critical ships.”

Vicefield added, “As the Arctic becomes of increasing global importance, creating a center of excellence for the construction of icebreakers – a highly exportable product – will be of significant economic benefit to the Canadian economy in the years to come.”

Canada’s Coast Guard icebreakers support year-round marine trade in eastern Canada, the St. Lawrence waterway and the Great Lakes. They provide icebreaking services to ensure commercial ships have access to Canadian ports during the winter, and support summer resupply activities to Canada’s Arctic communities and their industries. They are also platforms for search and rescue and environmental response operations.

“I’m happy to see that the process for the fleet renewal and new program icebreakers continues to move ahead under the NSS. The women and men of the Canadian Coast Guard save lives, keep our economy moving and protect our environment. This renewal will ensure they can continue to deliver critical services on the Great Lakes, the St. Lawrence waterway, the East Coast, and in the Arctic,” said Bernadette Jordan, Minister of Fisheries, Oceans and the Canadian Coast Guard.

James Davies, President and CEO of Davie Shipbuilding, said, “We have spent the past decade creating a cutting-edge shipbuilder that has delivered some of the most complex ships ever built in North America. Heading into the next decade as a partner in the NSS means we will be leveraging those skills and experience and applying our unique capacity and infrastructure to renew the federal fleet in a cost-effective and timely manner.”

Davies continued, “this will be the single largest shipbuilding program in Quebec since World War II and will ensure the continuity of employment at Davie as well as the development of Quebec’s maritime cluster, a major driver for the province’s economy. We now look forward to getting the over 1,000 workers who were laid off in 2017 back to work as soon as possible.”

“The NSS will ensure that Canada has a strong, effective fleet of ships to serve and protect Canadians for years to come. The announcement will not only see the revitalization of the Canadian Coast Guard fleet, but will also deliver economic benefits and create highly skilled jobs right across the country. Our government is committed to ensuring that, as we move forward with the NSS, Canadians will continue to see the economic benefits from this important industry,” said Navdeep Bains, Minister of Innovation, Science and Industry.