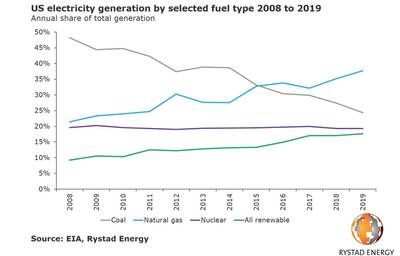 A new study revealed that coal power is being replaced by cleaner energy sources in the US – primarily due to an abundance of cheap natural gas.

According to Rystad Energy, new renewable energy capacity from solar and wind is on the rise in the US, and April 2019 marked the first month when more electricity was generated in the country from renewable sources than from coal.

However, the growing renewable energy sector alone is not wholly responsible for the on-going retirement of coal-fired power plants and the essential moratorium on the construction of new coal plants.

“The US thermal coal industry is in severe trouble. However, coal’s demise as the fuel of choice for power generators is primarily due to the upsurge of cheap natural gas and not renewable sources of power,” says Steve Hulton, Head of Coal Research at Rystad Energy.

“Strong growth in US shale gas production has more than halved the average fuel cost of natural gas for US electricity producers from 2008 to 2019, in turn leading to a remarkable rise in gas-fueled power generation,” Carlos Torres-Diaz, Rystad Energy’s Head of Gas Market research, added.

Rystad Energy forecasts that natural gas-fueled generation will hit a record 38% share of total US electrical power generated in 2019. This is almost two and a half times the level seen in 2008.

The increase has been spurred by the new capacity of renewable and gas power plants – offsetting the retirement of older coal-fired power plants – and from increased coal-to-gas switching, thanks to a combination of market mechanisms and higher thermal efficiency.

“The move from coal to gas was largely triggered by simple fuel cost economics. Lower gas pricing is a direct result of the falling production costs and increasing volumes of US shale gas extraction,” Torres-Diaz remarked.

The average cost of natural gas for US electricity generators has fallen almost 60% over the last decade, while the cost of thermal coal on the other hand has been relatively flat.

Despite the US not having a federal carbon pricing program, the switch from coal to gas power generation and the growth in renewable energy has resulted in lower carbon dioxide emissions from the power sector.

Rystad Energy forecasts that US natural gas prices will remain very low for the next couple of years given continued growth in gas production and infrastructure bottlenecks that will limit exports.

“With the Henry Hub price expected to remain below $3 per MMBtu at least until 2021 and limited room for cost cuts in the coal mining industry, gas demand from the power sector is expected to remain strong, painting a gloomy outlook for coal miners but having a positive impact on the environment,” Torres-Diaz added.