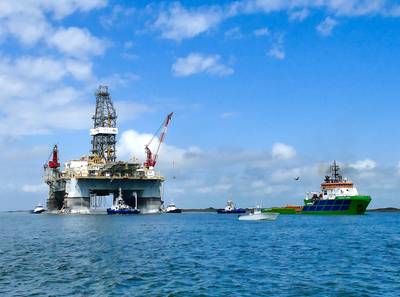 U.S. oil majors Exxon Mobil Corp and Chevron Corp were among the top buyers at a federal auction of oil leases in the U.S. Gulf of Mexico on Wednesday that generated more than $190 million - the highest since 2019.

The auction was a boon for federal coffers, but a potential setback for the climate policies of U.S. President Joe Biden, whose administration tried to suspend federal lease sales to fight global warming before a court forced them to proceed.

The United States was also among nearly 200 nations that adopted the Glasgow Climate Pact this month in a deal that for the first time asked governments to accelerate cuts in planet-warming emissions by limiting support for fossil fuels.

In the sale, the Bureau of Ocean Energy Management, an arm of Biden's Department of Interior, offered 80 million acres accounting for almost all available unleased Gulf of Mexico blocks. About 1.7 million acres were sold.

Exxon rounded out the top five, snapping up nearly a third of the tracts that sold for $14.9 million, making it the biggest buyer by acreage.

One analyst said Exxon's purchase of 94 shallow water blocks could be preparation for the company's first carbon capture and storage project, a proposal that Exxon floated in April.

Anadarko, meanwhile, placed the highest single bid in Wednesday's auction -- more than $10 million -- for a tract in the deepwater Alaminos Canyon.

A Gulf of Mexico auction conducted by the administration of former President Donald Trump last year brought in $121 million.

The average price per acre sold in Wednesday's auction was around $112 compared with last year's $233.

In a letter to the Federal Trade Commission, Biden noted that the nation's two largest oil and gas companies -- Chevron and Exxon -- were on track to double their profits while American families are paying more at the pump.

The drilling auction was the first Interior has held under Biden, whose administration paused oil and gas lease sales earlier this year after campaigning on a promise to end fossil fuel development on federal properties.

But Biden lost a court fight to oil-producing states that sued to reinstate the sales. An appeal is pending.

The sale was the first opportunity to test the oil and gas industry's demand for Gulf acreage with energy prices at multi-year highs. U.S. crude futures are up 95% in the last 12 months.

Following the sale, an oil and gas industry trade group, the National Ocean Industries Association, said the government leasing program was "critical to our energy future" because it supports economic growth and jobs and is a "lower-carbon energy alternative to oil produced by foreign, higher emitting producers, like Russia and China."

Despite the court-ordered resumption of auctions, Interior spokesperson Melissa Schwartz said the agency was "conducting a more comprehensive analysis of greenhouse gas impacts from potential oil and gas lease sales than ever before."

Environmental and progressive groups strongly opposed the sale and called on Biden to reform the leasing program.

"These lease sales are completely out of step with the greenhouse gas reductions that scientists say are needed and with the climate goals the Biden administration committed to just last week," Christy Goldfuss, senior vice president for energy and environment policy at the Center for American Progress, said in a statement.