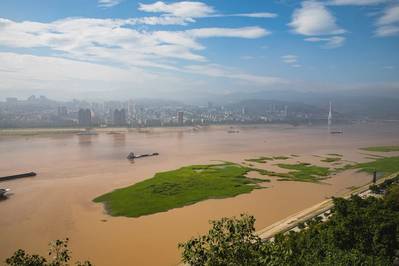 China has launched a crackdown on illegal sand mining operations on the Yangtze river, which have made large parts of central China more vulnerable to drought.

Excessive sand mining on the Yangtze, which provides water for a third of the Chinese population, is believed to be responsible for the abnormally low levels of water during the winter drought season in recent years.

Sand mining in the river and its connecting lakes and tributaries has also affected shipping routes and made it harder for authorities to control summer floods.

According to a notice issued by the water, public security and transportation ministries on Monday, the “comprehensive rectification” of mining activities on the Yangtze will help authorities improve flood control and ensure water supplies.

Local authorities have been ordered to draw up plans to regulate sand mining more effectively, and to ban or restrict operations in sensitive regions. They must also crack down heavily on illegal mining and take action against illegal gangs involved in the business.

However, the notice fell short of an outright ban on the activity, which is a lucrative source of income in a region already hit by a river-wide ban on fishing activities.

Sand mining is believed to have lowered the bed of the Poyang Lake - a Yangtze river flood outlet and one of the world’s largest sources of sand used in construction - by at least 20 meters (60 feet). Large parts of the lake now dry up in the winter season.

The provincial government of Jiangxi, which oversees the lake, also announced plans in January to build a dam on the Poyang to try to better regulate water flows, but experts said it could make the problems worse.