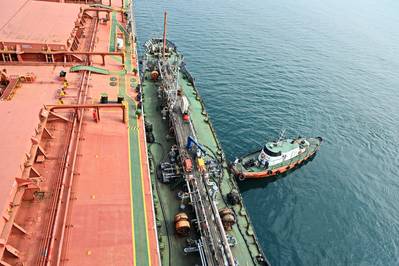 China more than halved the volume of export quotas for refined fuel, predominantly gasoline, diesel and aviation fuel, under the first allotment for 2022, while raising the allowances for low-sulphur fuel oil by 30%, industry sources said on Tuesday.

The deep cuts to refined fuel, largely expected by the market, was in line with the Chinese government's recent policy to curb excessive domestic refinery production amid a broad plan to reduce carbon emissions, the sources said.

Most of the latest quotas were granted to state-run firms including China National Petroleum Corp (CNPC), China Petrochemical Corp, or Sinopec, China National Offshore Oil Company, Sinochem Group and China National Aviation Fuel, said the sources, who asked not to be named as they are not authorized to speak to the press.

Separately, the government issued 6.5 million tonnes of quotas for exporting low-sulphur fuel oil, used primarily as marine bunker fuel. That was up 30% from the 5 million tonnes released in the first batch of 2021. "The timely release of LSFO quota lends support to a further increase in Chinese production of the marine fuel ... and a reflection of China's drive to establish itself into a bunker fuel hub in Northeast Asia," Chinese commodities consultancy JLC said in a research note on Tuesday.

China's Ministry of Commerce, which is responsible for quota releases, did not immediately respond to a request for comment.