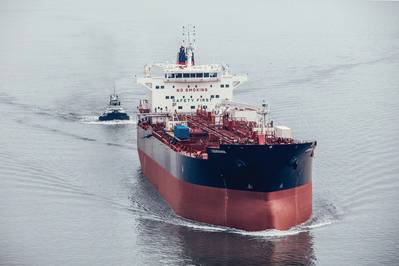 Crowley Maritime Corp. announced it will hold a christening ceremony Thursday, May 5 in New Orleans for the newly built Louisiana, the company’s third of four new Jones Act product tankers.

The 600-foot-long, 50,000-dead-weight-ton (dwt), 330,000-barrel-capacity tanker will operate in the U.S. Gulf and is capable of carrying crude oil or refined petroleum products, as well as various other chemical products.
Crowley has the option to convert the new tanker to liquefied natural gas (LNG) propulsion in the future, as the vessel is among the first tankers ever to receive the American Bureau of Shipping’s (ABS) LNG-Ready Level 1 approval.
Crowely said it expects more than 100 guests to attend the ceremony at the Port of New Orleans, including Carrie Templin – wife of Don Templin, executive vice president of Marathon Petroleum Corporation, the vessel’s charterer – who will break the ceremonial bottle of champagne across Louisiana’s hull to christen the vessel. Tom Crowley, Chairman and CEO of Crowley Maritime, will speak.
Louisiana was constructed by Philly Shipyard Inc., who also built sister ships Ohio and Texas for Crowley, and currently is constructing the fourth and final vessel of the series.