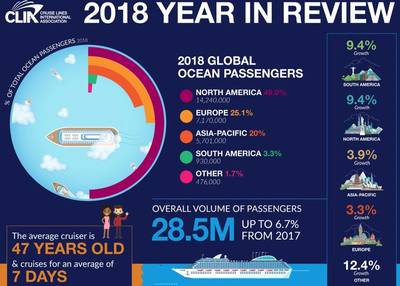 The global cruise passenger continues at a paced growth around the world with an almost seven percent increase from 2017 to 2018, totaling 28.5 million passengers.

While the cruise sector represents two percent of the overall global travel industry, this segment is on pace with international tourism worldwide. According to the latest UNWTO World Tourism Barometer, international tourist arrivals grew 6 percent in 2018, totaling 1.4 billion while cruise travel grew at almost 7 percent during the same timing.

“It is not surprising that cruise travel is on par with overall international tourism growth. Cruising makes international travel accessible for travelers worldwide and it is apparent in the 2018 CLIA global passenger findings,” said Kelly Craighead, president and CEO, CLIA. “From a renewed interest in cruises to the Mediterranean to a significant increase in adventure cruising, travelers are embracing cruise travel more than ever before.”

Cruise travelers from North America dominate cruise travel to the easily accessible Caribbean. Continued growth in cruising to the Caribbean, Bahamas, and Bermuda, is up 7 percent to 9.8 million passengers in 2018.