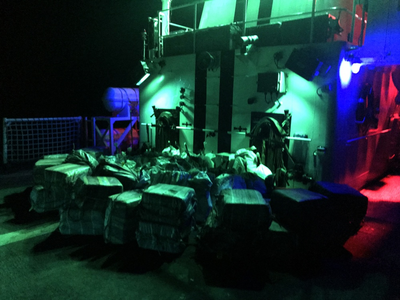 The crew of the Coast Guard Cutter Steadfast (WMEC-632) is scheduled to offload more than 26,000 pounds of seized cocaine in San Diego Friday.

The cocaine, worth an estimated $350 million, was seized in international waters of the Eastern Pacific Ocean. The contraband represents six suspected drug smuggling vessel interdictions and the recovery of floating cocaine bales by the crews of two Coast Guard cutters off the coasts of Mexico, Central and South America between late June and mid-July.

Six of the interdictions were carried out by the Steadfast’s crew, one of the Coast Guard’s oldest cutters commissioned in 1968. One interdiction was by the crew of one of the service’s newest ships, the Coast Guard Cutter Robert Ward (WPC-1130) commissioned in March, and is not only the cutter’s first drug bust, but the first drug bust by a Coast Guard Sentinel-class fast response cutter in the Eastern Pacific Ocean.

The Steadfast is a 210-foot Reliance-class medium-endurance cutter home ported in Astoria, Oregon.