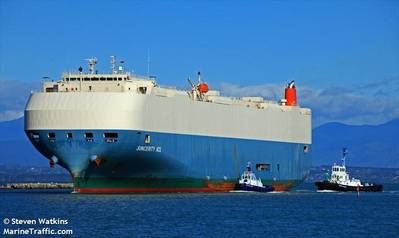 The Coast Guard has suspended the active search for the remaining unaccounted for crewmember of the Sincerity Ace, Wednesday.

“Following the conclusion of morning and afternoon searches by our aircraft and commercial vessels we suspended the active search. This is always a difficult decision and takes many factors into account,” said Chief Petty Officer Dennis Vetrano, with Coast Guard Joint Rescue Coordination Center Honolulu. "We extend our condolences to the families and loved ones of the crewmembers affected by this tragedy.”

Good Samaritans from four merchant vessels were able to rescue 16 of the 21 Sincerity Ace crew who abandoned ship following a fire, Monday. Four missing mariners were located but remain in the water as they were unresponsive and unable to react to life-saving equipment. Coast Guard watchstanders issued an Urgent Marine Information Broadcast Notice to Mariners requesting vessels transiting the area to keep a sharp lookout for the remaining unaccounted for the crewmember. Searches were conducted throughout the day Wednesday by a Coast Guard HC-130 Hercules aircrew and the crews of the motor vessels Venus Spirit and Genco Augustus.

The Sincerity Ace’s managing company, Shoei Kisen Kaisha Ltd., is coordinating with the merchant vessels for the transport of the surviving crew from the vessels' next ports of call. The company will make attempts to recover the four unresponsive crewmembers still in the water when other contracted ships arrive on the scene in several days. Commercial tugs were dispatched to the Sincerity Ace earlier in the week. The vessel remains uncrewed and adrift. At last report, it was listing to starboard and still on fire. The cause of the fire and the disposition of the cargo remain unknown.

Involved in the searches were:

“We are very grateful for the assistance the crews of these vessels have given during the search and rescue efforts,” said Vetrano. “These crewmembers went out of their way to aid their fellow mariners, and because of the remoteness of the incident the outcome may have been very different had they not responded.”

JRCC Honolulu received the initial notification from JRCC Japan at 1:04 a.m., Monday, of the situation. Watchstanders in Honolulu immediately issued a SafetyNet broadcast requesting the assistance of vessels in the area and directed the launch of the Hercules aircrews from Air Station Barbers Point. The master of the Sincerity Ace reported a significant vessel fire, ongoing firefighting efforts, and an intent to abandon ship.

Coast Guard 14th District watchstanders coordinated the rescue efforts with good Samaritans on the responding merchant vessels and the Coast Guard and Navy aircrews throughout the operation.

The commercial vessels involved are part of the AMVER, or Automated Mutual-Assistance Vessel Rescue System, a worldwide voluntary reporting system sponsored by the United States Coast Guard. It is a computer-based global ship reporting system used worldwide by search and rescue authorities to arrange for assistance to persons in distress at sea.
There is currently no imagery for this case.