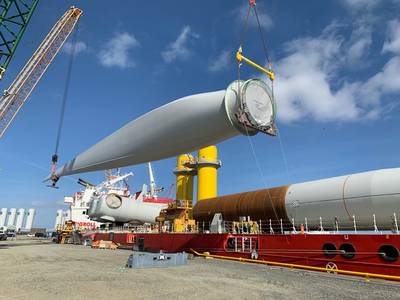 Dominion Energy and Ørsted have said that the turbine components and monopiles for the Coastal Virginia Offshore Wind (CVOW) pilot project have started their journey to North America.

The foundations, consisting of the turbines' monopiles, transition pieces and anode cages fabricated by EEW SPC, have been loaded onto the Bigroll Beaufort cargo ship in Rostock, Germany.

The components for the two, 6-megawatt Siemens Gamesa turbines were loaded in Esbjerg, Denmark, before the vessel embarked in mid-April on the approximately two-week transatlantic journey to Halifax, Nova Scotia, Canada.

"This is a monumental step toward the installation of the first offshore wind turbines in federal waters, which will deliver clean, renewable energy to our customers," said Mark D. Mitchell, Dominion Energy vice president of generation construction. "The construction of these two turbines will help us reach our goal for net zero emissions and position Virginia as a leader in offshore wind."

"This announcement marks yet another milestone in the U.S. offshore wind industry and reinforces Ørsted's leadership in facilitating a robust U.S. market," said Thomas Brostrøm, CEO of Ørsted North America Offshore.  "Ørsted's experience and the hard work of its colleagues have made it possible to keep the project on time and on budget in spite of the disruption of global commerce."

"Even though this project consists of two monopiles and transition pieces, it has a profound importance for the development of the U.S. offshore wind market, as this is the first project that successfully has passed all phases of BOEM approval," said Christoph Schorge, CEO of the EEW Group.

"This milestone will pave the way for large-scale commercial projects to follow. Both Dominion Energy and Ørsted are key developers in the U.S and the collaboration on this project demonstrates the determination toward the rapid development of U.S. offshore wind."

Installation of the two turbines, located 27 miles offshore, is expected to begin later this spring and they are expected to enter service by the end of the year. Onshore construction for the pilot project began last year in June to facilitate the interconnection of the turbines at a company substation near Camp Pendleton. At peak production, the pilot project will power 3,000 homes.

The CVOW pilot project was first announced more than two years ago and received approval in November 2018 from the State Corporation Commission.

Also this month, Dominion Energy is conducting ocean surveys to map the seabed of the 112,800-acre lease area where the company's 2,600-megawatt CVOW project will be built beginning in 2024. These surveys will help the company determine potential impacts to ocean and sea life and will support the development of the project's Construction and Operations Plan to be submitted to the Bureau of Ocean Energy Management (BOEM) later this year.