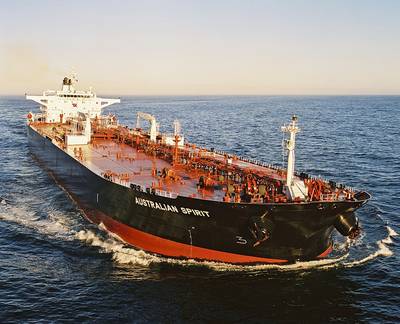 Supertanker rates are already close to five-year highs of over $83,000 a day - helped by a drop in shipping fuel bunker prices. Overcapacity, which has dogged owners for years, is also receding.
Herbjorn Hansson, chairman and chief executive of Nordic American Tankers, told shareholders recently that lower oil prices "may trigger stockpiling or have a more general positive impact".
"We see a clear increase in demand, especially from the East, and the oil is also carried over longer distances. There are very few idle ships out there now and the market is much tighter," he told Reuters.
Average earnings are still some off the over $120,000 a day seen before the 2008 slump in trade.
So far this year, oil held at sea has been no more than a few tankers as the discount for the front month of crude futures has been insufficient to finance chartering. The front-month discount for Brent is now only 34 cents, about half what it would need to be to do so.
Tanker owners have also preferred to trade their ships rather than opt for floating storage as vessels normally deteriorate when kept stationary.
The International Energy Agency forecast last week that global oil stocks will continue to build and could reach tank-tops next year. That could force the front of the crude oil market into a bigger discount, and encourage floating storage.
"Once we have gone into 2015, there may come a point when the rapid build-up of surplus crude in the market will open opportunities for floating storage. This scenario is a further positive for VLCCs (supertankers)," tanker broker E.A. Gibson said.
A contango in 2009 led to over 100 million barrels of oil being stored on tankers at sea and sold later.
"One would need a contango in the oil market to justify floating storage. Given the current developments in the oil market this cannot be ruled out," said Svein Moxnes Harfjeld, co-CEO with tanker group DHT Holdings.
"Continued oil demand and longer transportation distances combined with no fleet growth should support our expectations for 2015 on average to be better than 2014," he said. "If floating storage takes place, this will be an additional benefit."
(By Jonathan Saul and Christopher Johnson; Additional reporting by Joachim Dagenborg in Oslo, editing by William Hardy)