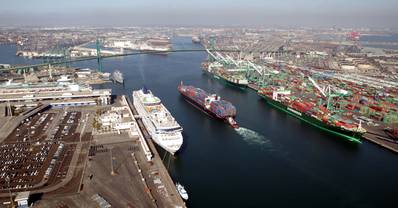 The Los Angeles Harbor Commission certified the final Environmental Impact Report for the proposed Southern California International Gateway (SCIG) intermodal railyard and approved a landmark rail infrastructure project that would increase the efficiency and competitiveness of moving containerized cargo through the nation’s busiest harbor complex to U.S. and global markets.

“Modernizing our transportation infrastructure is crucial to creating jobs, strengthening our economy and improving our quality of life in Los Angeles,” said Los Angeles City Councilman Joe Buscaino. “This project is needed to bring lasting prosperity to our region and the nation.”

“SCIG will establish a new national benchmark for the development of such facilities in California and across the country, as it will be the cleanest rail facility in history, said Matthew K. Rose, Chairman, and Chief Executive Officer of BNSF. “SCIG will set a new standard for green technology and change the status quo for how trucking companies serve railyards, while reducing traffic and improving air quality. We look forward to the project’s approval by the Los Angeles City Council and to construction of this important facility, beginning with the thousands of jobs it will create.  This action shows the entire world that the San Pedro ports are committed to competitiveness against an expanded Panama Canal. ”

“Expanding near-dock rail service sharpens the competitive edge that makes the Port of Los Angeles a global leader in international goods movement,” said Los Angeles Board of Harbor Commission President Cindy Miscikowski. “By requiring the highest achievable  low emissions  vehicles as a part of the operation delivery system ensuring that this will be the nation’s cleanest railyard, this project would be another model link in Southern California’s unparalleled freight logistics chain.”

Construction is due to begin later this year and create 1,500 direct and indirect jobs per year over three years. Expected to open in 2016, SCIG would generate up to 1,096 long-term jobs at full capacity.

As a hub for building trains bound for specific destinations throughout the country, SCIG would offer shippers, carriers and terminal operators expanded Class 1 railroad options for getting products to consumers more competitively and efficiently. High-tech logistics systems would maximize trucking operations by reducing turn times, one-way trips and emissions.

- Up to 1,500 direct and secondary jobs per year during construction that are expected to generate approximately $65.4 million in wages over the three-year construction period.

-  A project labor agreement valued at more than $255 million governing wages and working conditions and providing job and apprentice opportunities during construction.

-  Tax revenues of $31.4 million over the three-year construction period, with annual tax revenues from the operation reaching $14.6 million by 2046.

-  BNSF would give qualified local residents priority for all new jobs at SCIG and fund a workforce training program in partnership with local institutions to help area residents obtain these jobs.

Construction and operation of the facility would be subject to stringent environmental controls. Key operational features include:

-  SCIG would use only the cleanest available switching and long-haul locomotives and phase in the future generation of Tier 4 locomotives when the equipment becomes commercially available.

n-  All trucks serving SCIG must meet or exceed 2007 federal on-road low-emission engine standards, and 90% of the drayage fleet must be LNG-fueled or meet equivalent emissions standards by 2026.

- Trucks must use designated routes to avoid residential neighborhoods and will be monitored by GPS units as a condition of all drayage contracts.

-  BNSF would match port contributions of up to $3 million to advance the commercial development of zero emissions technologies that eliminate air pollution from port-related operations.

-  SCIG would use low-glare lighting, intensive landscaping and automation to maximize productivity while minimizing operational impacts on neighboring communities.

The Port would track and enforce environmental controls through a combination of project conditions, mitigation measures and lease requirements identified in the final EIR. The requirements will be incorporated into the terms of a 50-year lease.  Conditions for the proposed project are consistent with regional, state and federal transportation and air quality plans and objectives.