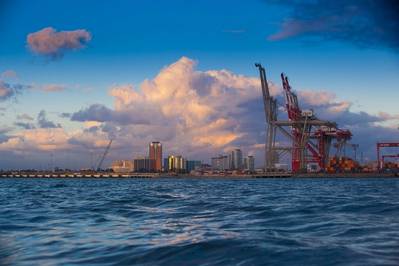 Long Beach forges on with modernization, green programs
The Long Beach Board of Harbor Commissioners has approved an $829 million budget for the Harbor Department’s next fiscal year, including more than a half a billion dollars for capital improvements at the Port of Long Beach.
The budget, which will be presented to the Long Beach City Council for its consideration, designates $555 million for capital investments including the Port’s major terminal redevelopment and bridge replacement projects.
For the fiscal year starting Oct. 1, 2015, the budget anticipates a 6.1 percent increase in operating revenue over the current fiscal year’s income. The Harbor Department generates revenue from goods movement through the Port of Long Beach, and receives no taxpayer revenue to operate.
Also, the newly approved budget includes the anticipated transfer of $17.74 million to the City of Long Beach’s Tidelands Operating Fund, which is used for beachfront improvements in Long Beach.
The Harbor Department’s spending plan focuses on strengthening the Port’s competitiveness in order to attract more business, furthering its role as an environmental steward and continuing to improve safety and security.
“Our goal is to build upon the success of the Port of Long Beach by attracting new trade, and with that, new jobs, to Long Beach and the region,” said Harbor Commission President Doug Drummond. “We are moving forward with important improvements that will help this community, by building a greener, more efficient Port of Long Beach.”
The biggest pieces of the capital improvement budget are the ongoing Gerald Desmond Bridge Replacement Project and the Middle Harbor Redevelopment, which is building the greenest container terminal in the world. Other improvements include sewer and street projects, dredging and rail improvements.
The budget also includes funds for planning activities for the Port’s “Energy Island” concept of enhancing energy security and sustainability, and for ongoing improvements as part of the critical “supply chain optimization” efforts to boost efficiency at the San Pedro Bay ports.
The Port of Long Beach is one of the world’s premier seaports, a gateway for trans-Pacific trade and a trailblazer in goods movement and environmental stewardship. With 140 shipping lines connecting Long Beach to 217 seaports, the Port handles $180 billion in trade annually, supporting thousands of Southern California jobs.