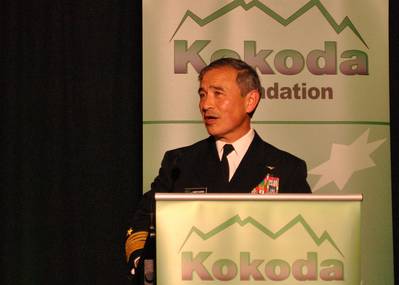 Adm. Harry B. Harris Jr., commander of U.S. Pacific Fleet, speaks about the Fleet's role in America's rebalance to the Indo-Asia-Pacific at a Kokoda Foundation conference. Harris stressed the importance of strengthening economic, diplomatic and military cooperation among the United States and allies to ensure regional stability, peace and prosperity. (U.S. Navy photo courtesy of the Kokoda Foundation)

The commander of U.S. Pacific Fleet reaffirmed America's commitment to the Indo-Asia-Pacific rebalance during a keynote speech in Canberra, Australia, October 31.

In his first international trip since assuming command on October 16, Adm. Harry B. Harris Jr. delivered his remarks at the Kokoda Foundation Conference during a trilateral strategic dialogue among Australia, Japan and the United States.

"Let me assure you, if you only remember one thing from my remarks tonight, it should be this," Harris said. "You can count on the United States of America."

The Kokoda Foundation researches Australia's national security challenges and fosters the development of a new generation of future strategic thinkers who are well-equipped to deal with the diverse security challenges that lie ahead, according to the foundation's website.

Harris stressed the importance of strengthening economic, diplomatic and military cooperation among the United States and allies to ensure regional stability, peace and prosperity.

"The relationships between our nations are as important to our future as they have been to our past. This is why I'm committed to deepening the maritime piece of our defense relationships with our allies and security partners throughout the Indo-Asia-Pacific," Harris said. "My intent is not to plan for war against any particular nation, but rather to lessen the chances of conflict by increasing security and stability more broadly throughout the region. But the Pacific Fleet is prepared, unequivocally, to respond to threats to our nation, our interests and our allies from a position of strength."

Noting that past cycles of austere economic conditions and domestic political turmoil did not stop America from persistently deploying capable naval forces to the region for the past 70 years, Harris confidently stated that the rebalance will make future presence even more robust.

"No one should question our commitment to the rebalance," Harris said. "Not only can we do this, we are doing this. The physical manifestations of our rebalance in new platforms, equipment, and technology are plain to see."

Indo-Asia-Pacific rebalance initiatives by the U.S. Navy and Marine Corps team include the ongoing first deployment of the new Littoral Combat Ship to Southeast Asia, the deployment of Marines to Australia, the arrival of Virginia-class submarines and San Antonio-class amphibious landing dock ships, and the future deployment of the P-8 Poseidon, the MV-22 Osprey, and the Joint Strike Fighter aircraft.

These new platforms will be combined with innovative operational concepts and led by naval commanders with extensive experience in the region. Harris said this enhanced naval power will be used to increase critical multilateral activities where regional navies can operate together to combat destabilizing maritime problems such as piracy.

Harris concluded that an increased intellectual focus brings a strong American vision for the region.

"Our president and secretary of defense have been crystal clear," Harris said. "We will rebalance to the Indo-Asia-Pacific, we will properly resource the rebalance, and we will work closely with our allies and partners as we do so.

"Make no mistake, the United States is and will remain a Pacific power."