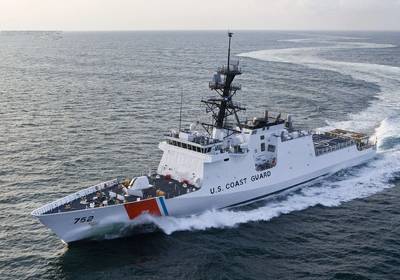 The U.S. Coast Guard announced Monday that its third National Security Cutter, Stratton, successfully completed several days of rigorous acceptance trials Friday to ensure the cutter meets its contractual requirements and is ready for delivery to the Coast Guard.

Stratton’s acceptance trials were conducted in Pascagoula, Miss., and at sea in the Gulf of Mexico by the Coast Guard and the U.S. Navy’s Board of Inspection and Survey.

Acceptance trials are the final significant milestone, or final exam, before the government takes ownership of a new cutter.  Representatives from the Board of Inspection and Survey inspected all of Stratton’s systems, tested its shipboard equipment, examined the quality of the cutter’s construction and evaluated its performance and compliance with the contractual specifications to identify any major deficiencies that need to be corrected prior to delivery.

The Board of Inspection and Survey will soon make a formal recommendation regarding the cutter’s acceptance to the Coast Guard.  The Coast Guard will work with the shipbuilder, Huntington Ingalls Industries, during the next few weeks to adjudicate identified discrepancies prior to Stratton’s acceptance.  Stratton is expected to be delivered to the Coast Guard in early September.

Stratton’s builder’s trials earlier this summer resulted in no major issues with the cutter’s important command, control, communications and computers systems.  Prior to acceptance, an National Security Cutter must pass more than 400 tests, including approximately 60 conducted during sea trials.

The Stratton is named for Capt. Dorothy Stratton, who in 1942 became the first director of the U.S. Coast Guard Women’s Reserve, known as the SPARs. The Stratton is the first Coast Guard cutter sponsored by a first lady and was christened by Michelle Obama July 23, 2010.