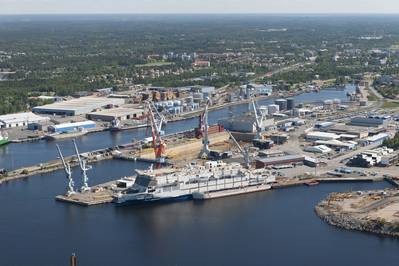 Scheduled for delivery in November 2013, the 96 meter long and 17 meter wide vessel uses some of the latest technologies and environmentally friendly innovations in accordance with the Government decision-in-principle on sustainable public procurement. The vessel is equipped with machinery using liquefied natural gas (LNG) and diesel as fuel. The requirements of energy efficiency and safe operation of the vessel in different accident situations have been taken more extensively into account in the design of the ship than earlier.

In addition to border safety and frontier supervision missions, the offshore patrol vessel can also be used for maritime search and rescue, military national defense and various underwater assignments both independently and in collaboration with other authorities. The vessel will also feature substantial oil destruction capacity with important meaning for the maritime oil destruction capability of Finland and the Baltic Sea region. The Finnish Environment Institute has been closely involved in the design process of the vessel.