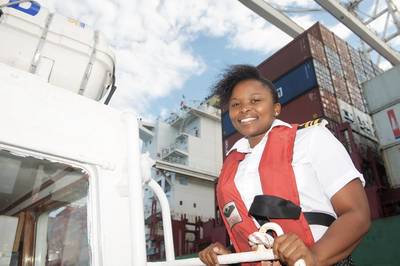 Containership 'MSC Sola' (11,660 TEU) largest to berth in Port of Ngqra, South Africa, had females in key roles to help berth the vessel

En route from the Far East, MSC Sola was guided into the Port of Ngqura by Xoliswa Bekiswa, who recently became the fourth black female marine pilot to obtain an open licence in South Africa, which allows her to help navigate vessels of any size and type into South African waters.

Two tugs navigated by a team of all female tug masters escorted the vessel into port.

At the previous port of call in South Africa, Durban, the ship was guided in by fellow female marine pilot, Bongiwe Mbambo, one of the three women who last year made history as Africa's first black, female marine pilots to obtain the open licence.

Rajesh Dana, Acting Port Manager at the Port of Ngqura, said the fact that the port can accommodate the new generation of super-ships such as the MSC Sola, demonstrates the importance of creating capacity ahead of demand, which is now bearing fruit.

The large vessel benefited from the deep water channel and berths at the Port of Ngqura which rank among the deepest in Africa. In Durban the ship was able to enter the port thanks to Transnet’s recent R300 million project to widen and deepen the harbour entrance.